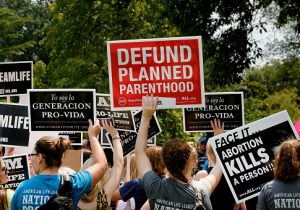 After failing to defund Planned Parenthood through legislation, Republican lawmakers are asking federal regulators to deny taxpayer dollars to the nation's largest abortionist.

On Tuesday afternoon, 41 senators and 153 congressmen sent letters to the Department of Health and Human Services asking the agency to cut off Title X funding to Planned Parenthood—a sliver of the $500 million the abortion provider receives from taxpayers each year. The Senate letter argues that the department's reimbursement policies "undermine the law," pointing to federal prohibition against funding "program where abortion is a method of family planning." The agency, the Senate letter says, should break from Clinton administration legal interpretations that allowed Title X recipients to share office space with abortionists. House Republicans were even more blunt, saying federal law "drew a bright line between family planning and abortion" and that the agency had flaunted it.

"The Title X program have blurred the line between family planning and abortion [sic]," the House letter says."To ensure that the federally funded family planning services offered by Title X grant recipients are unquestionably separate and distinct from abortion, Title X service sites should be physically, as well as financially, separate from facilities that provide abortion."

An HHS spokesman declined to comment on the letters.

The messages are meant to advance the GOP's stated opposition to abortion and Planned Parenthood funding, in light of its failure to redirect the $500 million Planned Parenthood receives each year from taxpayers to local health centers that do not perform abortion. The GOP majority had the chance to defund the nation's largest abortion provider through repealing Obamacare, House legislation, and the Omnibus bill, but failed to do so because of internal Republican conflicts. A senior Senate GOP aide whose boss signed the letter told the Washington Free Beacon the letter was designed to give cover to the Republican lawmakers who ensured Planned Parenthood would continue to benefit from taxpayer dollars.

"A regulatory strategy is important, but it's not a substitute for taking votes and writing laws," the aide said. "Republicans seem to think Congress just has a constitutional duty to write strongly worded letters."

Behind the scenes some pro-life activists fumed at the letters. Republicans had the chance to exercise their control to pass legislation reaffirming the prohibition against taxpayer funding of abortion organizations, but chose to pass the buck to regulators. A senior pro-life leader called legislative leaders cowards for failing to act forcefully.

"Imagine the incompetence of elected representatives who couldn't defund Planned Parenthood even after the organization was caught red-handed selling baby body parts—that they are forced to grovel before the administrative state to do the job they couldn't," the source said.

Pro-life groups publicly backed the letters and called on the agency to take steps to defund Planned Parenthood without explicit orders from Congress.

"It is time to act swiftly to disentangle abortion centers from the Title X network. Doing so would be consistent with the president's pledge and subsequent actions to defund Planned Parenthood and reallocate funding to alternative providers," Marjorie Dannenfelser, head of the pro-life Susan B. Anthony List, said in a statement.

Terry Schilling, executive director of the American Principles Project, said the agency's dealings with abortion providers affects all of its activities. He warned that many health care centers worry that Title X funding could be used to force them to participate in the practice, pointing to state laws that force pro-life organizations to refer patients for abortions.

"Not only is this an effort to shift funding away from Planned Parenthood, but it's an important defense of pro-life pregnancy centers, which are now apprehensive about seeking Title X funding at all in fear of being legally forced to advocate for abortion," Schilling said. "Secretary Azar should act on the advice of these lawmakers and reinstate the 1988 regulations that required facilities receiving Title X funding to be physically separate from facilities that promote and perform abortions."

The failure to deny Planned Parenthood millions in public dollars could have political consequences, according to the Senate aide. Legislation to defund the nation's largest abortionist would have forced Red State Democrats campaigning as moderates to vote on the issue and risk alienating both their base and the general election population.

Another pro-life activist put it more starkly. Planned Parenthood spends millions of dollars each election with all of its assets backing Democrats. The billion-dollar organization benefits from taxpayer funding that allows it to dedicate millions to politics, allowing it to campaign against the same lawmakers who will not vote to defund it.

A Planned Parenthood spokesman called the defunding effort "outrageous" and "dangerous" in an email, saying it would be a "radical departure" from existing federal policy. Cutting off funding at the agency level would hinder care for patients who currently visit Planned Parenthood clinics. The spokesman compared it to a domestic version of the Mexico City Policy, which prohibits federal funding of abortion overseas. The policy, which abortion supporters call the "gag rule," has been put in place by every Republican president and repealed by every Democratic president since 1984.

"This is a domestic gag rule … [that] would prohibit any health care provider from sharing information about, or even mentioning the word abortion if they serve Title X patients," the spokesman said in a statement. "This would have devastating consequences, and essentially dismantle the nation's program for affordable birth control and reproductive health care, which 4 million people rely on."