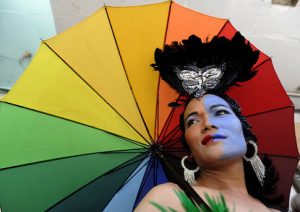 The National Institutes of Health is spending over $100,000 to combat "intersectional stigma" of transwomen in Nepal.

The project will deploy a "stigma research initiative" in the South Asian country as a means to "explore anti-trans stigma" against transwomen, or biological men who identify as women.

Researchers at Public Health Foundation Enterprises, a nonprofit based in California, said their taxpayer-funded project is necessary because no one has ever investigated trans stigma in Nepal before, and it is "past time" to do so.

"TW's unique vulnerabilities related to stigma are different from those of [men who have sex with men] MSM and other key populations, and it is past time that their specific risks and intervention needs are explored," according to the grant.

The project began in July and has received $140,625 from taxpayers so far. Research is set to continue through April 2020. The project is entitled, "Reducing Intersectional Stigma Through Increased Social Participation Among Transwomen in Nepal."

Researchers on the project will also work with the Blue Diamond Society in Nepal, the first LGBT group in the country whose mission is to fight for "social justice" of sexual and gender minorities.

"This proposal will embed a stigma research initiative within the [Blue Diamond Society] through capacity building efforts and engagement of a multi-sector group of stakeholders interested in addressing stigma and HIV," the grant states.

"Capacity building efforts will increase local research capabilities to conduct research on stigma and HIV and create an ongoing initiative to address the effects of stigma towards sexual and gender minorities in the region," according to the grant.