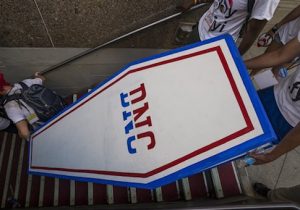 Dozens of field workers have filed a class action lawsuit against the Democratic National Committee, claiming the party that is pushing employers to pay a $15 minimum wage and more in overtime failed to pay overtime and minimum wages to its own employees.

Justin Swidler, the attorney representing the field workers, argued the Democratic Party failed to pay workers a minimum wage and denied them overtime compensation. Swidler "says the lawsuit seeks ‘fair pay for fair work,' and holding the Democratic Party to the very ideals that it embraces," according to CBS Philly.

The 2016 Democratic platform pushed for a $15-per-hour minimum wage, a nearly $8 increase from the current minimum, and promised to defend an Obama-era regulation forcing employers to pay a higher rate to employees for working more than 40 hours.

Some of the Democrats' workers put in 80-90 hours per week, according to Swidler, and got only $3,000 per month in compensation. "They got paid a flat salary of $3,000 a month, which isn't even minimum wage for some of the hours that they were working," Swidler said.

The Democratic platform decried the current federal minimum of $7.25 per hour as " starvation wage" and declared "no one who works full time should have to raise a family in poverty."

The Democratic Party, Swidler noted, claimed it did not have enough money to pay workers overtime.

"One of the arguments that the Democrats are making is that they just don't have the money to pay overtime to their workers," Swidler said.

"These workers were out there in a campaign that was promising $15 an hour minimum wage, and expanding the overtime rights of workers," Swidler added.

The lawsuit named several Democratic party organizations, including the Pennsylvania Democratic Party and the DNC.

Former Pennsylvania Gov. Ed Rendell, the chairman of the Democratic National Convention Host Committee in Philadelphia, said that he told workers before they were hired that they would receive substandard pay.

Rendell pointed out, however, that the plaintiffs did not work for his committee and that it paid interns and unpaid volunteers bonuses.

"In fact, we gave our interns, and our unpaid volunteers, bonuses at the end," Rendell said.