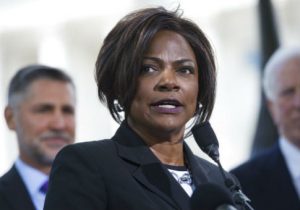 Democratic Rep. Val Demings (Fla.) recently claimed that her First Amendment rights are "different" than those for other Americans.

The congresswoman made the assertion to a Facebook commenter on May 3 after advocating her desire for greater gun control in a post, the Daily Wire reported Tuesday.

The exchange started when Demings wrote on Facebook that she supports "common sense gun legislation" and "stand[s] against the gun lobby."

Hours later, a Facebook user referenced an incident from February 2009, when Demings served as the chief of police in Orlando, Fla. Someone broke into Demings' vehicle at the time and stole her agency-issued 9 mm Sig Sauer gun, ammunition, handcuffs, and baton. An internal-affairs investigator subsequently gave Demings a "written censure" for not properly securing her firearm in her car.

"Hey Val.. have they found that gun that was stolen out of your car??? Let's talk responsible gun ownership first, before we take on other points..," the commenter wrote.

"Teach me how to be PERFECT Stephen because obviously YOU are. My First amendment right is DIFFERENT from yours. You are wasting your time," she wrote earlier this month.

The commenter then called Demings out and reminded the lawmaker that her constitutional rights are the same as those for other Americans.

Other users also posted comments criticizing Demings after she appeared to claim that she has special rights.

When the Daily Wire contacted Demings' office for comment, her communications director, Caroline Rowland, responded, "No, she will have no comment on that. Thank you." Rowland then reportedly hung up the phone.