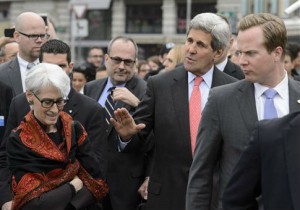 Congressional leaders have begun pressuring their colleagues to cut off all U.S. funding for the ongoing talks with Iran over its contested nuclear program as the Obama administration rushes to hash out the details of a deal in the coming months, according to multiple sources and a letter that will be sent next week to appropriators in the House of Representatives.

With the deadline approaching, congressional Republicans have been exasperated by the Obama administration’s efforts to prevent them from having any oversight over the deal.

Reps. Peter Roskam (R., Ill.) and Lee Zeldin (R., N.Y.) are now petitioning their colleagues on the House Appropriations Committee to prohibit all taxpayer funding for the talks, the Washington Free Beacon has learned.

This would purge all U.S. funds available to Obama administration officials for travel abroad, hotel stays, and any other activities related to the P5+1 talks with Iran.

In a letter that will be sent next Tuesday to leaders on the House Appropriations Committee and its Subcommittee on State and Foreign Operations, Roskam and Zeldin recommend that funding for the deal in the fiscal year 2016 budget be fully eliminated.

"As you begin work on the Fiscal Year (FY) 2016 State, Foreign Operations, and Related Programs Appropriations bill, we urge the prohibition of funding for the ongoing U.S. involvement in dangerous P5+1 negotiations with Iran," the lawmakers write, according to a draft of the letter obtained by the Free Beacon.

The lawmakers express frustration over the Obama administration’s reported concessions to Iran, which are said to permit Tehran to retain aspects of its nuclear infrastructure, including the ability to enrich uranium, the key component in a nuclear bomb.

"After two negotiation extensions, billions of dollars in sanctions relief, and an emerging deal that would utterly fail to dismantle Iran’s nuclear program, we should abandon these talks until Tehran is prepared to make meaningful concessions that would truly block its path to a bomb," the letter states. "We therefore respectfully request that you work to include the prohibition on additional funds for U.S. involvement in these ill-conceived negotiations."

There is also a consensus among Republicans and critics of the administration’s diplomacy that Iran cannot be trusted to uphold any agreement it might sign.

"At this point, Iran seems more intent on buying time to advance its nuclear program rather than negotiating in good faith," the letter states. "Congress must act to ensure that negotiations with Iran do not proceed if Tehran continues its pursuit of nuclear weapons with impunity and if no meaningful progress is made."

The lawmakers also lash out at the White House’s efforts to keep Congress out of the negotiations and "in the dark" about key details of the emerging final deal.

"The deal reportedly under consideration would leave Iran’s nuclear infrastructure virtually intact and expire in ten years, at which point the mullahs could freely pursue a nuclear weapon," Roskam and Zeldin write. "Moreover, Congress has been left completely in the dark by the administration, which continues to stonewall bipartisan calls for prospective sanctions on Iran and congressional approval over any final agreement."

One senior congressional aide familiar with the letter said that taxpayer dollars should not be spent on a deal that would only embolden Iran’s activities.

"The administration has refused to include Congress in any way, shape, or form throughout its destructive negotiations with Iran," the aide said. "I’m not surprised that lawmakers are trying to exercise their constitutional power of the purse in order to prevent indefinite extensions of these backward talks."

"They are fed up and the American taxpayers, who don’t want to be complicit in this failing strategy, are fed up," the source added. "What this letter is basically saying is ‘This experiment has gone on long enough, so we’re no longer going to foot the bill.’"

"The days and weeks ahead will be critical. Our negotiations have made progress, but gaps remain. And there are people, in both our countries and beyond, who oppose a diplomatic resolution. My message to you—the people of Iran—is that, together, we have to speak up for the future we seek," said the president.