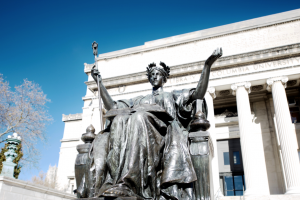 A Columbia University student publicly complained about her professor using the word "Negro," even though he said it in a lesson about 1960s America.

The Columbia Daily Spector ran a story Thursday about what happens "when professors make racially insensitive remarks." The paper cited a complaint by student Maria Fernanda Martinez of a perceived "microagression." Martinez said her professor told the class it was appropriate to use the term "Negro" when discussing the 1960's, a time when that was the politically correct term for African-Americans.

"Martinez, troubled by these comments, sent her professor an email after class, including links to resources about why using the term is offensive, but said she saw no real change in her professor’s approach to teaching the material," the Spector reported.

"I didn’t pay attention in class after that," Martinez said.

The Spector reported Martinez, nevertheless, didn't report the instance "because she felt that his comments were ill-informed rather than targeted at her."

But in an email to the Spector, Professor Todd Gitlin defended the educational use of the word. "It is in fact true, a matter of historical record, that African Americans in the ’50s and ’60s wanted to be called ‘Negroes.’ Denying that practice would be a falsification of history," he wrote.

Gitlin is in a position to speak with some authority on the matter; he was president of the left-wing Students for Democratic Action at the height of the civil rights movement in the early 1960s.

In another instance highlighted by the paper, a student complained her English professor said the N-word when reading out loud from a book.

"It’s hard to continue on, not knowing if you are welcome in a space completely or [if] people have the knowledge to welcome you to a space," she said.