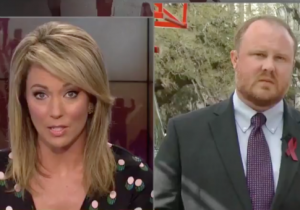 A visibly angry Baldwin pressed Caldwell on his vote against a motion to debate a bill that would ban assault weapons. She then referenced a Florida House resolution that declares pornography a public health risk.

"Why is pornography a bigger health risk than semiautomatic weapons in the hands of a deranged individual?" Baldwin asked.

"Listen, we have got to focus on what is really going to make a difference—" Caldwell said before Baldwin interjected.

"Representative Caldwell, why is pornography a bigger health risk than a semiautomatic weapon in the hands of a deranged individual?" Baldwin asked. "Answer my question please, sir."

"We shouldn't have weapons in the hands of deranged individuals—" Caldwell started before Baldwin interrupted again.

Later in the interview when Caldwell attempted to talk again, Baldwin interrupted him shortly into his response.

Baldwin also called an AR-15 a weapon used in war, although an AR-15 is a civilian semiautomatic firearm.