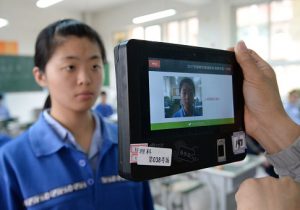 In China, banks, airports, hotels, and even public toilets are trying to verify people's identities by analyzing their faces, the Washington Post reports.

In addition to the technology's everyday convenience uses, like apartment access, the technology is also being used by police to track and analyze individuals' behaviors. That information could be used to identify, as described in one Chinese police report, the "bad guys."

The aim is for the facial recognition data to merge with databases and create an "identity card"—containing criminal and medical records, travel bookings, online purchases, and social media comments—for every individual. The identity card would also include an image of the citizen's face.

The Post described the plans for the budding program:

The pilot in Chongqing forms one tiny part of an ambitious plan, known as "Xue Liang," which can be translated as "Sharp Eyes." The intent is to connect the security cameras that already scan roads, shopping malls and transport hubs with private cameras on compounds and buildings, and integrate them into one nationwide surveillance and data-sharing platform.

It will use facial recognition and artificial intelligence to analyze and understand the mountain of incoming video evidence; to track suspects, spot suspicious behaviors and even predict crime; to coordinate the work of emergency services; and to monitor the comings and goings of the country’s 1.4 billion people, official documents and security industry reports show.

The Post noted that the program ultimately hopes to give officials the ability to "track where people are, what they are up to, what they believe, and who they associate with." It would assign each individual a single "social credit" score based on whether the government and fellow citizens "consider them trustworthy."

According to tech executives working on the project, the goal of the project is to "shine a light on every dark corner of China, to eliminate the shadows where crime thrives."

The "Sharp Eyes" project title is taken from communist slogan "the masses have sharp eyes," and stems from Mao Zedong's attempt to have citizens spying on one another.

"Surveillance technologies are giving the government a sense that it can finally achieve the level of control over people’s lives that it aspires to," Zenz said.

While China is not alone in using the new technologies for security—the United States, for instance, uses facial recognition to compare images from crime scenes with a national database of mug shots—the communist government has taken a much more extensive and comprehensive approach to utilizing the technology, the Post reported.

Yet it is China's ambition that sets it apart. Western law enforcement agencies tend to use facial recognition to identify criminal suspects, not to track social activists and dissidents, or to monitor entire ethnic groups. China seeks to achieve several interlocking goals: to dominate the global artificial-intelligence industry, to apply big data to tighten its grip on every aspect of society, and to maintain surveillance of its population more effectively than ever before.