Weiss emailed Goffman in September 2013 with a series of suggestions for convincing the Times’ Matt Wald of the commercial viability of carbon capture and sequestration (CCS) technology, a vital component of the agency’s stringent power plant emissions regulations.

Five minutes later, Goffman sent an email to five colleagues in his office and the agency’s public affairs division. Unredacted language in the email is identical to language in Weiss’ list of talking points.

The Environment & Energy (E&E) Legal Institute obtained the emails through a Freedom of Information Act request. Chris Horner, a senior legal fellow at E&E, said they show extensive behind-the-scenes collaboration between EPA and third-party groups that support the regulations.

"The chief lawyer tasked with making the global warming agenda happen cuts and pastes Team Soros arguments and strategies into emails and sends them to colleagues as his own," Horner said in an email.

Weiss, who is now the senior vice president for campaigns at the League of Conservation Voters, another influential green group, did not respond to a request for comment.

Goffman took the lead in crafting the EPA’s legal justification for its power plant rules, which are expected to hit coal-fired power plants hardest. Laws require federal regulations to be commercially viable, so the EPA needed to show it was possible for coal plants to comply with the rule.

To do so, it relied on CCS technology, which it said could allow such plants to reduce carbon emissions below the regulations’ threshold. Critics of the rules, including the coal industry, said CCS was not "adequately demonstrated," the standard for technology that allows private actors to comply with the regulations.

Weiss’ email had a frantic tone. "Very important," the subject line said. "NYT to write CCS not adequately demonstrated?" He warned Bond and Patel that Wald sounded skeptical of CCS’s commercial viability. "It might be worth your while to have [EPA administrator] Gina [McCarthy] or some other senior person call him ASAP."

Minutes later, Goffman emailed Weiss. "Thanks for the note on Matt Wald," he wrote. "We’re on it."

Weiss replied with a series of suggestions for selling Wald on CCS’s commercial viability. "The key is to make the most compelling case that CCS is ‘adequately demonstrated,’" he wrote. "Since the strategy of the opponents seems to be cast doubt on the technology, the more evidence that it is on its way, the stronger the case."

Five minutes later, Goffman emailed five other EPA officials, including Reynolds. Most of the email is redacted, pursuant to a FOIA exemption designed to protect the confidentiality of internal deliberations among federal officials.

However, the first and last sentences are identical to language in Weiss’ email. Horner says that suggests that Goffman simply copied Weiss’ suggestions into his own message. "The brazen collusion is staggering," he said.

"This is a spectacular example of how ideological activists brought in to the Obama administration to jam through the left-wing agenda see no distinction between EPA and their former green-group colleagues," Horner said.

"No one forwarded a suggestion as their own, and one email is not representative of how the agency works," she said in an emailed statement.

"EPA’s priority is reaching out and engaging with the public and stakeholders so we hear from as many voices as possible," Harrison said. "Nothing we do is about one individual or group coming up with an idea or suggestion."

"In the last few days, Ms. McCarthy has referred to several early-stage carbon capture projects as a sign that industry can build the needed equipment," he wrote. "But the four she referred to in the committee hearing ranged from under construction to planned. None of them would sequester the carbon dioxide, and all would sell it."

Five days later, Weiss co-authored a CAP paper echoing the points he had emailed to EPA.

CAP has been described as "a boot camp" for the Obama administration’s climate policy staff. A number of the think tank’s experts have moved on to influential roles in the administration, and its proposals are frequently incorporated into administration policies.

"Anyone who pays attention to these issues must acknowledge that CAP plays a very unique, almost extraordinary role in developing documents for the administration and in advancing personnel," energy lobbyist Scott Segal told Greenwire in April.

Horner said collaboration between CAP and EPA illustrates a trend that has borne itself out in the language of regulations promulgated by the agency, including its rules regarding power plant emissions.

"Other emails I have obtained demonstrate that they take what the greens tell them and paste it in," he said. "That's unlawful and one of the major reasons these greenhouse gas rules need to be blocked."

Liberal Site ThinkProgress Shuts Down After Failing to Find Buyer 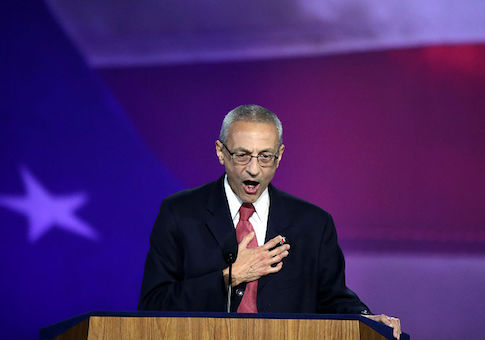