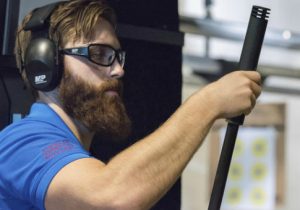 The Bureau of Alcohol, Tobacco, Firearms, and Explosives (ATF) released statistics to the Washington Free Beacon on Wednesday showing that the nearly 1.3 million silencers registered in the United States are rarely used in crimes.

"As of 02-03-2017, there are 1,297,670 suppressors registered with ATF under the National Firearms Act," Justice Department spokesman Dillon McConnell told the Free Beacon.

That number is an increase of nearly 400,000 registered silencers since the same time last year, when ATF records indicated there were 902,805 silencers in the country.

In an internal memo leaked to the Washington Post last week, ATF Associate Deputy Director Ronald Turk argued that silencers should be deregulated due to the low rate at which they are used in crimes. Currently silencers are regulated by the restrictive National Firearms Act, which also regulates machine guns.

"Consistent with this low number of prosecution referrals, silencers are very rarely used in criminal shootings," Turk wrote. "Given the lack of criminality associated with silencers, it is reasonable to conclude that they should not be viewed as a threat to public safety necessitating [National Firearms Act] classification, and should be considered for reclassification under the [Gun Control Act]."

Turk said the popularity of silencers combined with paperwork required by the National Firearms Act is bogging down the ATF and causing months-long wait times for gun owners across the country.

Congressional Republicans and gun rights activists have made silencer deregulation a top priority. The Hearing Protection Act, which would remove silencers from the purview of the National Firearms Act, was introduced in both chambers of Congress in January. Activists have expressed excitement about the prospect that it may become law.

The National Rifle Association, which supports the bill, said the ATF's numbers show that silencers should be deregulated.

"Every year more than a million hunters and recreational shooters are staving off potential hearing loss with the safe and responsible use of suppressors," NRA spokesperson Lars Dalseide said. "This is a protection every law-abiding gun owner has the right to enjoy, and the ATF numbers back that up."

Gun control activists like Stacey Radnor, spokeswoman for Everytown for Gun Safety, say the numbers show that strict regulation of silencers has kept them from being used in crimes.

"Removing silencers from the National Firearms Act would undermine the law's success—the use of silencers in crime is rare, further underscoring the fact that the NFA currently works to keep silencers out of dangerous hands," Radnor said.

The Hearing Protection Act has been referred to the House Judiciary Committee and the Senate Committee on Finance. It is currently awaiting hearings.