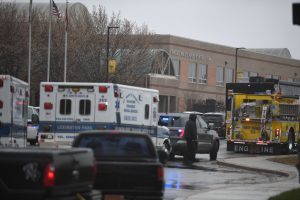 A shooting at Great Mills High School in Maryland was stopped when an armed school resource officer fired upon the attacker on Tuesday morning.

St. Mary's County Sheriff spokeswoman Cpl. Julie Yingling told the Associated Press on Tuesday that two students had been injured by the attacker but that the attacker was shot by a school resource officer, ending the incident. The attacker and the two victims, one female and one male, were all transported to local hospitals according to multiple media reports. The victims and the shooter were all initially in critical condition, according to NBC Washington.

Sheriff Timothy K. Cameron said at a press conference later in the morning that the attacker was pronounced dead at 10:41 a.m.

The attacker entered the school shortly before classes began on Tuesday morning, Sheriff Tim Cameron said in a press conference. He preceded to pull out a gun and shoot a female student. A male student was also shot by the attacker.

The school was placed on lockdown during the incident and students have been evacuated to a different high school to be reunited with their parents. Agents from the Federal Bureau of Investigation and the Bureau of Alcohol, Tobacco, Firearms, and Explosives are on the scene assisting local law enforcement officials with their investigation.

The names of the victims, the attacker, and the school resource officer have not yet been released.

UPDATED 1:10 P.M.: This piece has been updated with information from officials that the attacker was pronounced dead.