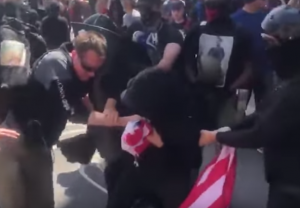 A progressive and registered Democrat was assaulted by militant leftists earlier this month for carrying an American flag at a protest in Portland, Oregon, and he is recovering from his injuries.

Paul Welch was given a concussion and a severe laceration, requiring four staples in his head, after he refused to give black-clad Antifa members his "fascist" American flag, the Oregonian reported. Welch then took a club to the head and collapsed to the ground, blood pooling around him.

In downtown Portland on August 4, Welch joined a crowd of progressives protesting a rally by the group Patriot Prayer, which they consider right-wing. Welch said he wanted to carry Old Glory to show that those in liberal cities have pride in America.

"I had felt like showing that a liberal, free Portland — or any major city, really — is much more American and much more numerous and strong than any of these interloping groups," he said.

But video shows some of the protesters are staunchly anti-American, since they tried to forcibly take his flag away and then assaulted him from behind.

Welch told the Oregonian what the attack was like:

"My bones turned to Jell-O and I just went down," said Welch, who believes he was struck with a metal object affixed to the end of the weapon.

A crowd of onlookers watch as Welch lies on the ground in a fetal position. Another antifa activist, holding a shield, appears to stand above the injured man and jabs him with a makeshift weapon.

"I remember thinking there was a very good chance that I could be beaten to death," Welch said.

Welch said being attacked by members of the far left is damaging to those on the left generally.

"It strikes me as the worst sort of political theater," he said of what happened to him. "It's kind of like you're playing into your opponents' hands when you do that sort of thing. That's not what I was there for."

He said he wanted to send a message about groups on the right not having an exclusive claim to symbols of patriotism.

"The right and certainly a lot of smaller groups like Patriot Prayer might rush to things like the flag and try to take it up as, ‘This is our symbol exclusively,'" he said. "Part of my thinking was to take it back."

Welch is a veteran of progressive protests, having attended the Women’s March and supported anti-ICE protesters in Portland. He said he voted for Sen. Bernie Sanders (I., Vt.) in the 2016 presidential primary and Hillary Clinton in the general election.

This particular protest led to multiple injuries, with police using non-lethal weapons after one group of protesters started throwing rocks and bottles at officers.