Amazon banned the sale of a gun book on Wednesday night for an unexplained violation of the company's rules.

The listing for The Liberator Code Book: An Exercise in Freedom of Speech, which had been available on Amazon since Aug. 1, was removed from Amazon's website. The web address where the book had previously been listed now redirects to an error page. The web address where a Kindle book titled The Liberator: An .STL File Published as a Book also now redirects to an error page.

Both books had been published through Amazon's self-publication services. Amazon told the Washington Free Beacon it was banning publication of the books and their sale through their website.

"This book was removed for violating our content guidelines," Jack Evans, an Amazon spokesperson, told the Free Beacon. 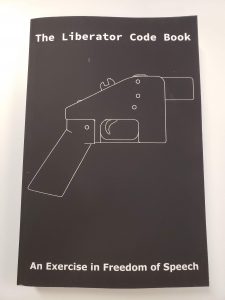 Evans directed the Free Beacon to the Kindle Direct Publishing content guidelines, which ban the publication of pornography, offensive content, illegal and infringing content, public domain and other non-exclusive content, and books that result in a "poor customer experience." Amazon refused to elaborate on how the books violated their guidelines.

"Don't have any additional comment beyond what I've shared," Evans told the Free Beacon when asked which guideline Amazon believes the books violate. "Link I provided states that books must adhere to our guidelines."

Amazon has long sold a wide range of the world's most controversial books. Hitler's autobiography Mein Kampf is available through multiple listings on the site. Marx and Engles’s Communist Manifesto is also available through multiple listings. The Turner Diaries by Andrew Macdonald—the white supremacist manifesto that helped inspire Timothy McVeigh to commit the Oklahoma City bombing—is for sale on the site. The Protocols of the Learned Elders of Zion, the world's most famous anti-Semitic diatribe, is featured for sale in multiple listings.

The company even sells The Los Alamos Primer: The First Lectures on How To Build an Atomic Bomb, which is a collection of previously classified documents detailing how scientists who worked on the first nuclear bomb went about building it.

A copy of The Liberator Code Book: An Exercise in Freedom of Speech obtained by the Free Beacon reveals that the bulk of its 425 pages are dedicated to reprinting the raw code of a computer file containing the specifications of Cody Wilson's single-shot 3D-printed gun design known as the Liberator. Along with a two-page instruction guide on how to assemble a Liberator, the book includes a notice that it was not "created, authorized, or directed" by Cody Wilson's Defense Distributed group, and a one-page editor's note.

"The purpose of this exercise is to give a physical analogy between computer code and books," the note begins. "Preventing the publishing of code online is no different than banning a book from circulation and pulling it from the shelves of a library."