Around 700,000 people overstayed their temporary visas in fiscal year 2017, according to a recently released estimate from the Department of Homeland Security.

Six hundred thousand of these individuals are suspected to have remained in the country, according to DHS, while the other 100,000 or so simply departed after their visas expired. The 700,000 count represents a tiny fraction of the nearly 53 million people admitted to the United States in FY17.

However, it is 300,000 more people than the number apprehended trying to illegally cross the southwestern border for the same year, indicating that visa overstays represent a more serious source of illegal immigration than border crossers.

Visa overstays have been a priority of DHS under Secretary Kirstjen Nielsen, who introduced new measures regulating a key visa program last year. Nielsen argued at the time that tightened security for temporary visa holders was a vital tool for combatting terrorism.

"The United States faces an adaptive and agile enemy, as terrorists continue to explore ways to reach our country and to direct, enable, and inspire attacks against us. It's critically important we stay ahead of these threats by improving our security posture," she said.

Temporary visas account for the overwhelming majority of visas issued to foreign nationals in any given year, dwarfing the approximately one million green cards issued annually. They last from six months for tourists to many years for students. As such, the DHS's report provides vital information about who is coming to the United States on temporary visas, and how many people opt to stay after they're meant to be gone. 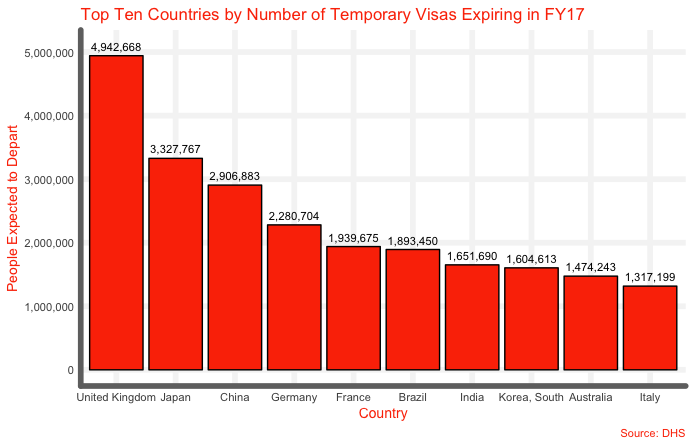 Although DHS did not publish country-by-country measures of how many temporary visa holders are currently in the country, it did provide a rough proxy: the number of temporary visa holders expected to depart in FY17. Unsurprisingly, major European and Asian allies like the United Kingdom, Japan, and Germany lead. So, too, do China and India, which are both the world's largest countries and which provide the overwhelming majority of high-skilled workers to the United States.

One important caveat to the DHS report is that it only counts sea and air arrivals, not individuals entering over land. As such, Canada and Mexico are omitted from the tables the report provides, as the overwhelming majority of arrivals from those two countries enter by the highway rather than on a plane or boat.

Two regions of the world predominate as sources of visa overstayers. Latin American arrivals make up 37 percent of eventual overstayers, while Europeans are 24 percent. This is thanks in large part to high numbers of visa overstayers from countries like the United Kingdom, Brazil, Venezuela, and France. 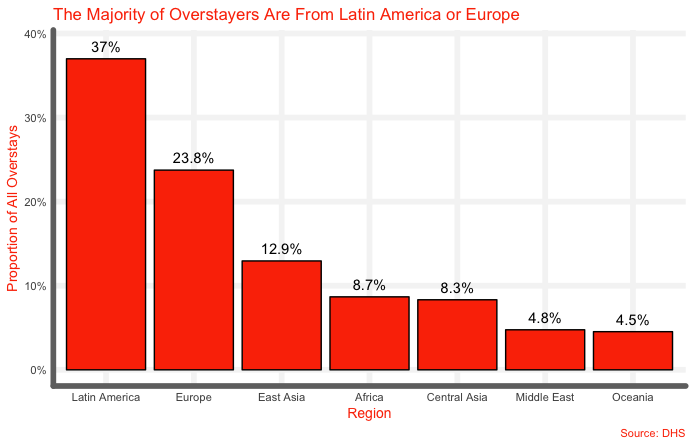 The overstay rate—the total number of overstays divided by the number of people expected to depart in a given year originating from a given country—is of more interest. Looking at that figure paints a different picture. 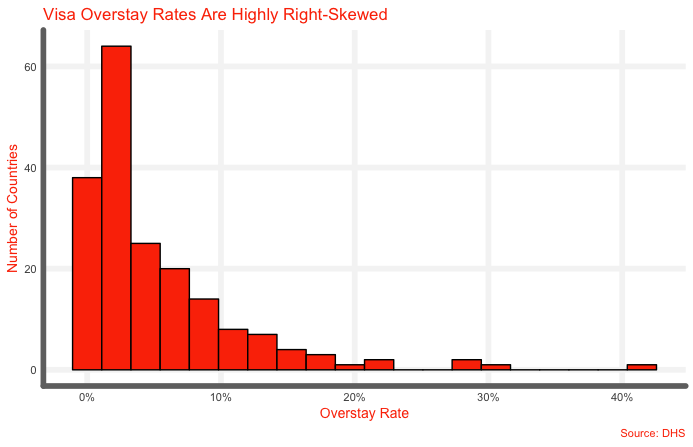 Indeed, the overwhelming majority of those over-ten-percent countries are located in Africa. Laos, Bhutan, Afghanistan, Yemen, Iraq, and the tiny Pacific islands of Palau, Togo, and the Solomon Islands, join the African nations on that list. 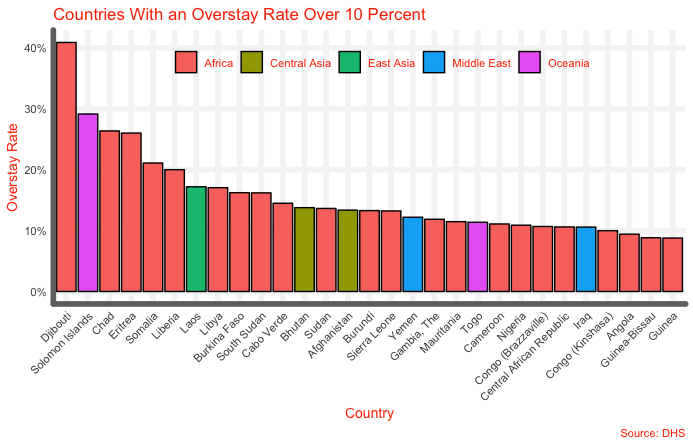 Six percent of arrivals from Africa overstay their visas, as compared to one to two percent for other regions of the world. In other words, a person arriving from one of a number of African nations is far more likely to overstay his or her visa than from somewhere else.

Beyond nation/region of origin, the DHS report provides information about what kinds of visa recipients most frequently overstay. Temporary visas come in a number of different forms: B1 and B2 visas cover up to six months temporary presence for business or pleasure; F, M, or J visas cover a student or exchange visitor's period of study; and residents of certain countries can come to the United States for up to 90 days without a visa thanks to the Visa Waiver Program. The report also specifies an "other" category, covering temporary workers, family members pending permanent visas, and attendants of diplomats. 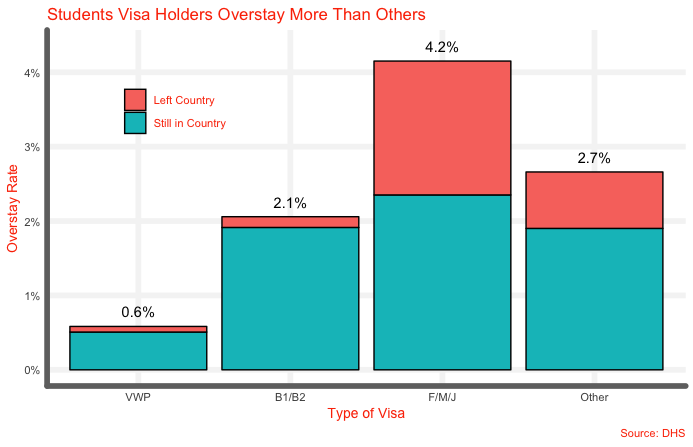 Student and exchange visa holders are more likely to overstay than any of their peers, although a large proportion of that rate is attributable to students who do leave eventually. Unsurprisingly, fewer than one percent of arrivals from Visa Waiver Program countries overstay, indicating that the program is relatively successful.

By contrast, about two percent of B1/B2 visa holders overstay their visas, and about two percent of the "other" category. It is unclear what proportion of the other category's overstays is attributable to temporary workers, although the other groups included therein are more likely to either leave with their diplomatic charge or to change their status to a permanent family preference visa.