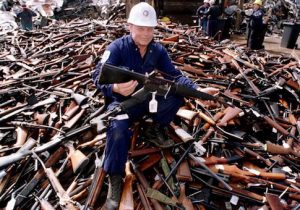 Seven people were killed in a shooting in Western Australia on Friday.

Someone in Osmington, Australia, a small village near the town of Margaret River, murdered seven members of the same family. Police responded to a call about the shooting around dawn. They found three generations of the same family killed and recovered two firearms from the scene.

"Police are currently responding to what I can only describe as a horrific incident," Western Australia state police commissioner Chris Dawson told the Associated Press. "This devastating tragedy will no doubt have a lasting impact on the families concerned, the whole community and, in particular, the local communities in our southwest."

The police said that four children and three adults were among those murdered.

"It appears that gunshot wounds are there, but I don't want to go further than that," Dawson told the BBC. "The loss of any life is tragic, but four children and three adults—this is a significant tragedy."

Australia effectively banned the ownership of most firearms for most people in the wake of a 1996 shooting in Port Arthur. The ban was enforced through a gun confiscation scheme that included a mandatory buyback program.

The country's gun ban has been hailed by many gun-control activists in the United States and around the world as a template for preventing mass shootings and gun violence. Former President Barack Obama praised the gun ban in 2015 while bemoaning the fact that he hadn't been able to pass the gun-control policies he had wanted to at that point in his presidency.

"When Australia had a mass killing—I think it was in Tasmania—about 25 years ago, it was just so shocking the entire country said, ‘Well, we’re going to completely change our gun laws,’ and they did," he told comedian Marc Maron during a podcast taping. "And it hasn’t happened since."

The country had just seen a mass shooting—where four or more people were murdered—a year earlier after a man murdered his wife and three kids when Obama made those comments. The country was also in the midst of a spike in gun crime at the time.

Hillary Clinton also expressed support for Australia's mandatory buyback system during her 2016 campaign before a spokesperson quickly walked it back. Most recently Democratic representative Eric Swalwell (Calif.) penned an op-ed calling for a gun confiscation scheme similar to Australia's in the United States.

Gun murder after Australia's ban decreased at nearly the same rate as in the United States, which did not institute a gun ban, and other violent crimes saw an increase. The effectiveness of the country's gun ban remains a heated debate as does the idea that the United States should adopt a similar gun ban.

Police have not yet released information on the Osmington shooter and did not speculate on the motives for the killings.