Liberal super PAC has been losing followers and engagement for months

The Lincoln Project gained influence in large part through social media, where its slick ads provoked former president Donald Trump to attack it and its leadership. But while the group plans for a post-Trump existence, analyses of the group’s social media traction show its digital footprint has flatlined since Trump left office, as the group was further beset by sexual and financial scandals.

Since President Joe Biden took office in January, the liberal super PAC has lost tens of thousands of Twitter followers, and its digital footprint on Facebook has flatlined.

According to Social Blade, a social media data analysis company, the Lincoln Project has lost followers on Twitter in each week since Trump’s second impeachment trial on February 13. In the first week of February, the organization gained 984 followers but has shed followers every week since then.

Lack of engagement appears to be at the root of the liberal PAC's social media collapse. According to Sprout Social, another analytic tool, the Lincoln Project’s mentions have plummeted since Trump left office in January. Mentions fell 55 percent from January to February, and an additional 25 percent in March. In April, the group's mentions fell 14 percent from March totals.

Beyond that, the mentions the group is getting on Twitter are overwhelmingly negative. By an over two-to-one margin, Sprout’s analysis found that the super PAC’s Twitter mentions are negative. Only 11.3 percent of Twitter sentiment about the Lincoln Project is positive, compared with 23.8 percent that is negative, with a recent spike occurring earlier in April. 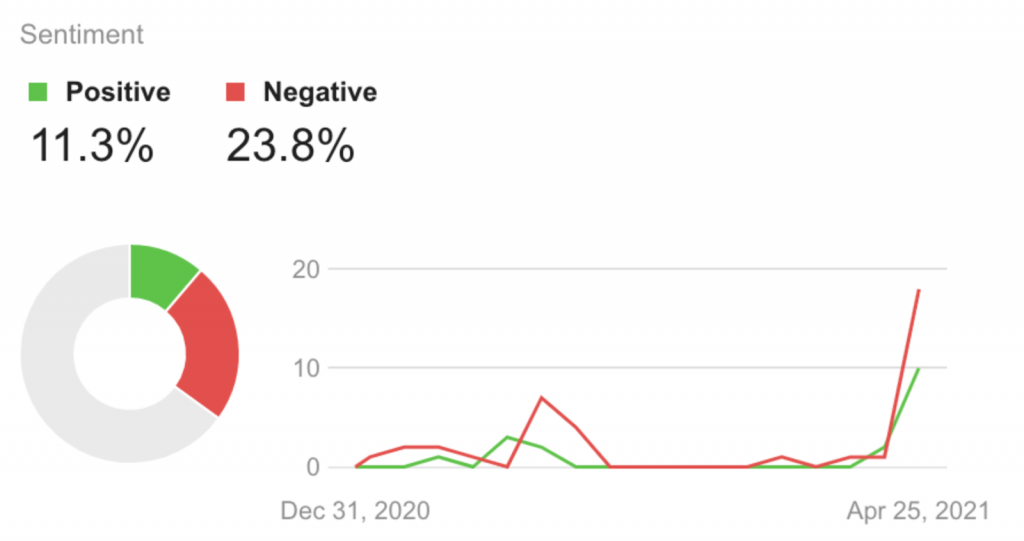 The Lincoln Project originally had two stated goals: defeating Donald Trump and ensuring "Trumpism failed alongside him," but the organization has thus far come up short. The liberal super PAC Priorities USA evaluated the group’s viral Twitter ads after the election and found that "the better the ad did on Twitter, the less it persuaded battleground state voters." With Trump gone, the organization has been more consumed with allegations of grifting tens of millions of dollars from liberal donors and covering up an alleged pedophile than with defeating Trumpism.

The group is attempting to regroup, bringing on Fred Wellman as executive director despite his six figures of debt. The Washington Free Beacon reported that Lincoln Project cofounder Rick Wilson paid off his own mortgage 16 years ahead of schedule amid bombshell reports that the organization knew about allegations of John Weaver’s inappropriate relationships with children as young as 14 years old.

Social Blade’s predictive analysis tool estimates that the Lincoln Project will continue to lose followers from its peak of 2,822,223 in early February 2021. In one year, Social Blade estimates the organization’s Twitter following will drop to 2,465,063, and within five years, it is predicted to have lost one million followers, dropping to 1,725,058. The organization’s standing on Facebook is similarly bleak. Social Blade’s analysis shows that the organization has flatlined in total likes and fallen off a cliff in terms of "total talking about."

Days before the 2020 election, Lincoln Project cofounder Steve Schmidt told donors that "five years from now, there will be a dozen billion-dollar media companies that don’t exist today. I would like to build one, and would invite all of you to be part of that."

The analyses conducted by both Social Blade and Sprout Social cast doubt on the Lincoln Project’s ability to become one of those billion-dollar media empires. 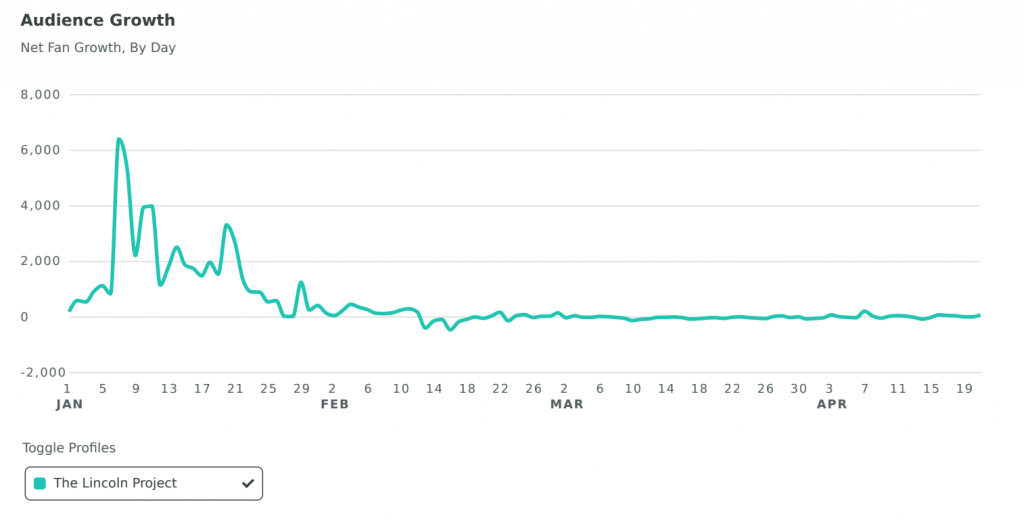