Where the Wild Things Are

Review: Piero di Cosimo at that National Gallery of Art, Washington D.C., through May 3, 2015

If, despite his manifest excellence, Piero di Cosimo never achieved the same prominence as his rough contemporaries Leonardo, Michelangelo, and Raphael, perhaps one reason is that everyone found him to be a bit odd. Evidence of his eccentricity is not only to be found in his paintings, but also in what we have had passed down to us regarding his habits.

The artist and biographer Vasari notes that Piero, "would sometimes stop to gaze at a wall against which sick people had been for a long time discharging their spittle, and from this he would picture to himself battles of horsemen, and the most fantastic cities and widest landscapes that were ever seen." He would "only eat when hunger came to him," and apparently "reduced himself to eating nothing but boiled eggs, which, in order to save firing, he cooked when he was boiling his glue, and not six or eight at a time, but in fifties; and, keeping them in a basket, he would eat them one by one."

In his hometown (Florence) and in his lifetime (1462-1521) he was particularly remembered for a "strange, horrible, and unexpected invention" he created for display during the annual Carnival. Vasari again:

This was the Car of Death, wrought by him with the greatest secrecy in the
Sala del Papa. … This triumphal chariot was an enormous car drawn by buffaloes, black all over and painted with skeletons and white crosses; and upon the highest point of the car stood a colossal figure of Death, scythe in hand, and right round the car were a number of covered tombs; and at all the places here the procession halted for the chanting of dirges, these tombs opened, and from them issued figures draped in black cloth, upon which were painted all the bones of a skeleton. … And these figures of the dead, at the sound of certain muffled trumpets … came half out of their tombs, and, seating themselves upon them, sang to music full of melancholy. … Before and after the car came a great number of the dead, riding on certain horses picked out … from among the leanest and most meager that could be found … each had four grooms draped in the garb of death. … After the car were trailed ten black standards; and as they walked, the whole company sang in unison, with trembling voices, that Psalm of David that is called the Miserere.

Vasari concludes this account by noting that, "at the first sight it did not seem suited to a Carnival."

Another reason for Piero di Cosimo never achieving A-list status may be that he never achieved, or apparently never wanted to achieve, a single distinctive style. A consultant from McKinsey wandering through the splendid collection of his paintings currently on exhibit at the National Gallery would no doubt have to wonder, what exactly is the brand, here? To the unbriefed eye, one or two of the Madonna and Childs on display could (almost) be from the hand of Raphael; another including the infant John the Baptist seems cribbed from Leonardo’s Virgin of the Rocks; another, now with two musician angels, also could (almost) be a Leonardo; here and there you could mistake a Mary Magdalene for a Botticelli.

To the extent that there is a somewhat common stylistic thread, it is oddness. Looking carefully at the background of Piero’s large Visitation with Saint Nicholas and Saint Anthony Abbot—actually from the National Gallery’s permanent collection—one can detect the following: low on the left, an Adoration of the Shepherds, and behind them, coming down the mountain, the Magi en route for their own visit; on the right—jarringly, on an otherwise generally pleasant canvas—Herod’s men massacring the innocents as mothers and babies scramble over the side of a platform in terror; this takes place below a building on which a tiny monkey is scampering along a railing, and down the hill from another structure that (because why not?) is decorated with a mural, a painting-within-the-painting, of the Annunciation. 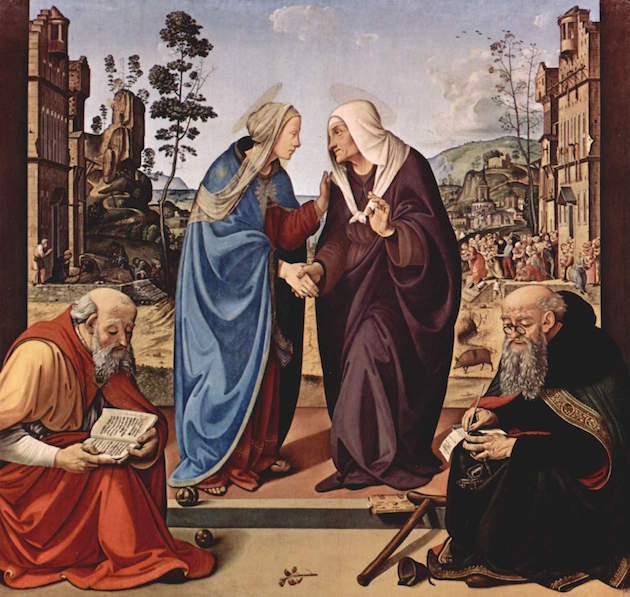 It seems unlikely that the patrons who commissioned the painting—Florence’s Capponi family—would demand such eclectic juxtapositions of tone and chronology, or if they did, it seems likely that most other prominent artists of the day would have made an attempt to talk them out of it. However it came to be, the finished work is evidence of Piero’s pure sense of fun and self-indulgence and taste for the unusual.

This appetite became truly unchained in those works where Piero left religion, or at least Christianity, behind entirely. Piero’s wild A Hunting Scene and Return from the Hunt, plausibly believed by the curator of this exhibit to be inspired by passages from the Epicurean philosopher-poet Lucretius, depict an utterly un-biblical scene of men in an early, savage, and beastly state, conspiring with satyrs to burn down a wood and massacre the animals within.

Also in a classical mode, this time finding inspiration in scenes from Ovid, Piero’s Liberation of Andromeda depicts Perseus slaying an utterly weird marine dragon that wallows in a boiling, fabric-like sea. Vasari later claimed of the effort that "it is not possible to find a more bizarre or more fantastic sea-monster than that which Piero imagined and painted" for this canvas. 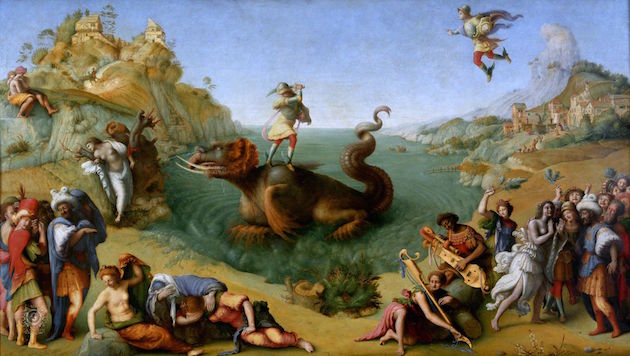 To our over-stimulated eyes, such efforts may no longer seem as strange as they must have to Piero’s original patrons—nor does the "high" Renaissance, during which Piero painted, any longer seem unusual for the opportunity it provided for an artist to earn a living by illustrating scenes drawn variously from Christianity, pagan religion, Epicurean anthropology, and his own eccentric personal vision.

Considering the matter in reverse, Piero’s original patrons would find the National Gallery’s exhibit very strange indeed, with all of these various works ripped from their original contexts as focuses of worship in private chapels or as smutty decorations for the houses of wealthy businessmen, hung together in a post-Romantic celebration of an individual craftsman’s genius. It is lucky for us that such opportunities exist.