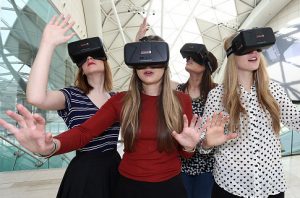 You can watch it on YouTube: the moment when Ronnie O'Sullivan, the most talented snooker player in the world, proves a good enough sport to try out a virtual-reality pool game for a software developer in California. He puts on the projecting headset like an oversized diver's mask with the lenses blacked out, the haptic hand controls imitating a pool cue, and he studies the arrangement of the balls. Then he leans down to line up the shot on the virtual pool table—and promptly falls flat on his face, because the table isn't, you know, actually there to support him. "@#$%&*," he curses, "that’s scary."

It is scary, in point of fact, and Ronnie O'Sullivan's face-plant is a tempting image with which to begin describing the dangers the next generations of computer technology promise to create for us. But in the meantime, the snooker player's stumble provides an unfortunate metaphor for the odd new book from tech guru Jaron Lanier, Dawn of the New Everything. Lanier wants us to reject artificial intelligence, and he wants us to embrace VR—the exciting new worlds of virtual reality. The trouble is that, like O'Sullivan's missing table, neither of them actually exist enough to support him. Readers will want to give Dawn of the New Everything a chance, but when the book tries to seize that chance, it falls flat on its face. "It looks like this book might come out at about the same time that VR gets commonplace," Lanier suggests—a prediction of the near future so far from accurate that he leaves us with little confidence in his predictions of the far future.

Lanier is often credited with having coined the term "virtual reality." Back in the 1980s, he started VPL Research, a company that created VR kits and sold them to interested researchers and Hollywood studios. (The latter would celebrate his work in Lawnmower Man, a weak 1992 filming of a Stephen King story.) But despite his role in the technological industries, he never lost his worry about the changes happening around him. In 2010, he published a book called Who Owns the Future and in 2013 another book titled You Are Not a Gadget. Both expressed his concerns about what he called an emerging "digital Maoism," with machine analysis grinding away at the mounds of data collected by social networks.

Unfortunately, those two books are also much better, much more coherent and powerful, than Dawn of the New Everything. In this new volume, Lanier seeks to update his old anti-algorithm thesis. He also aims at extending his critique into a denunciation of AI—which he thinks is that natural outgrowth of the fascinations that dominate the thought and finances of Silicon Valley and thereby dominate most of the world’s computer industry. And he demands that we see virtual reality as the better path for cyber advancement.

Lanier even wants to use the book as an occasion for constructing a memoir, spooning autobiographical elements into the crevices of his argument where they expand, like freezing water in the cracks of a sidewalk, to break his chapters into fragments. That's not to say that the man has had an uninteresting life. His mother was a dancer who died when he was nine, leaving him in the care of a father who thought they should build electronic musical instruments together and let the boy design the geodesic dome in which they lived. Lanier snuck his way into college without completing high school, got a job working for Atari, designed interfaces for gaming platforms, and now serves as a research scientist for Microsoft.

Try as he might, however, Lanier has trouble presenting that odd life as a compelling reason for us to believe that the future of true humanism lies in our embrace of virtual reality. Quite what he means by virtual reality is more than a little vague. "VR scientists are . . . honest when we tell you we're fooling you," he writes, and that is a warning sign. Perhaps virtual reality will be a way of improvising a new world in a kind of "shared lucid dreaming." Or perhaps virtual reality will be "a person-centered, experiential formulation." It might even combine movies and jazz with the structures of computer programming, and it will all be good. We shall be as gods, "glittering angels soaring above an alien planet encrusted with animate gold spires."

Ugh. The suggestion—argument is really too strong a word—is that virtual reality stands as our only alternative to artificial intelligence. Still, Lanier is not wrong that the Internet grew from roots in both libertarianism and utopianism, and the two combined to make us pay "a heavy price" now, decades on, with the cost-free Internet paid for by a commercializing that has turned us all from consumers into the consumed. The machine-algorithms have gotten so good that they can target us with fake news designed to appeal to our prejudices, and those algorithms are all about to give way to the neural-networks that will act as artificial intelligences controlling our lives.

Of course, if AI can eventually control reality, then why can't it control virtual reality? Perhaps we will be able to escape our computer overlords by living vicariously in carefully constructed fantasies, but those overlords will be helping construct the fantasies. Besides, the virtual is not the real. The problems of the age need us not to retreat further into the virtual but to turn back outward toward reality—the existential world, real locations inhabited by real other people. Jaron Lanier is in love with the idea of a virtual alternative to the cyber-commerce that dominates our online lives these days, but all he’s come up with for that alternative is some gooey names—"glittering angels soaring above an alien planet encrusted with animate gold spires"—for good, old-fashioned solipsism.

That's no way to spend our time. Having fallen on his face, Ronnie O’Sullivan now understands that snooker on a real table isn't like playing pool on a virtual table. Hopefully we won't need a similar pratfall to learn that real life isn't like a virtual life.