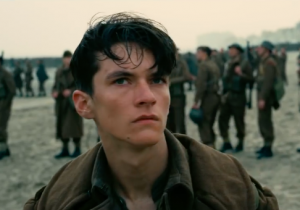 The USA Today review of Christopher Nolan's newest film Dunkirk notes that there are not enough women and people of color in the World War II epic.

"The movie captures the real-life heroism of the Dunkirk evacuation in 1940, when nearly 400,000 Allied soldiers were pulled out after the Germans trapped them on a beach in Nazi-occupied France," he wrote. "Nolan's ambitious story revolves around three tales unfolding at different times over land, sea, and air, only coming together at the end."

"The trio of timelines can be jarring as you figure out how they all fit, and the fact that there are only a couple of women and no lead actors of color may rub some the wrong way," Truitt wrote.

The film revolves around the exploits of the British Expeditionary Force, which was drafted from the British Isles. Accordingly, there were no known women on the beaches of Dunkirk and or many people of color.

The demand for more diversity in the film drew some chuckles on social media for its ahistoricity.

It was highly problematic that the British Expeditionary Force and the French army stranded such a monochrome crew. https://t.co/6OgplqgzK5 pic.twitter.com/7slZa1pGGT

So @briantruitt. How many "women and people of color" do you think there actually were at Dunkirk? https://t.co/ObviKh0RCr

The heroic tale of #Dunkirk would have been improved.. if more women or a "lead actor of color" had been involved 😢😬https://t.co/tr9QAQaP2E pic.twitter.com/YrdcI1sdNL