The Battle for America’s World War One Memorial

In 1919, Kansas City, Missouri raised the modern equivalent of $34 million to build a memorial to the 116,516 U.S. soldiers who died in the Great War. It took 10 days to raise the sum, and one fourth of the city pitched in to make the memorial a reality.

The result of that outpouring, completed in 1926, was the Liberty Memorial, an Egyptian revival monument whose main feature is a 217-foot tower adorned with guardian spirits (representing Honor, Courage, Patriotism, Sacrifice) and twin Sphinxes (Memory and Future). It is a massive and impressive monument. That it could be funded in less than two weeks by a mid-sized city in the heartland is evidence of the toll the war took on the nation.

One hundred years later, the Liberty Memorial in Kansas City is the only monument to World War I that is national in scope, as opposed to the many fine local monuments that have been erected.

Washington, D.C., resisted the rush to memorialize the war that some thought would be the last ever fought. While D.C. followed in the footsteps of many European capitols by erecting a tomb of the unknown, its plan for a World War I memorial fell victim to two problems so familiar to Washington: bureaucratic infighting and cost overruns. The foundation had been laid for the proposed National Victory Memorial, a grand temple of the Ionic order that was intended as "the crowning effort of the great struggle," when Congress cut off money. The National Conservation Corps used the memorial’s skeleton as a lumber yard during the Great Depression.

Today history is repeating itself, as another memorial commission—for the Eisenhower—is locked in a bitter war of attrition with Congress over funding. The outlook for a national World War I memorial in the nation’s capital is brighter. Spurred by the death of the last American veteran of World War I, Frank Buckles, in 2011, plans are underway to complete a memorial by November 11, 2018, the 100 year anniversary of the war’s end. An open design competition has already concluded. Five finalists have been selected.

The winning design will take over D.C.’s Pershing Park, east of the White House. The park was built in 1981 to honor Gen. John J. Pershing, who commanded U.S. troops in World War I, although it is in bad shape due to neglect and poor design. A bronze statue depicts the general surveying the bleak expanse before him. A water feature that made the park capable of beauty in better days has been shut off for years. A glass gazebo in the middle of the park that used to sell concessions and rent ice skates is locked. The rest, apart from a few planters and trees, is concrete: insufferably hot during the summer, grey and wet during the winter.

However apt a metaphor this inhospitable modernist wasteland is for World War I—a war fought in No Man’s Land with poison gas—it is a poor tribute to the American general it is meant to honor. Pershing’s bronze, described as "the last of the Great Man statues" exists in uneasy tension with concession stands and ice skating.

Clearly, Pershing Park sends a message to visitors that is, at best, more complicated than what was intended. When the national World War I memorial is completed, it, like Pershing Park and all monuments, will communicate its own message about its subject. But what message this should be is the subject of some debate.

According to David Mayernik, an art historian who recently sat on the panel about the memorial hosted by the National Civic Art Society, memorials can serve essentially three functions: therapeutic, documentary, and rhetorical.

Therapeutic memorials are built in the years following the memorialized event for the benefit of those who lived through it. The purpose of such memorials is to console. The many thousands of memorials built immediately after World War I, for example, were modest attempts to commemorate and mourn fallen sons.

Another example is the Vietnam Memorial Wall. The polished gabbro wall is unlike most other memorials in that it invites visitors to reach out and touch it, an act of communion with loved ones killed in the war. A concrete trough at the foot of the memorial collects flags, flowers, wreaths, pictures—items often placed before headstones in cemeteries, which themselves serve an important therapeutic function. A scale replica of the wall owned by the Vietnam Veterans Memorial Fund is even billed as the "Wall that Heals," an explicit reference to its therapeutic intent.

Documentary memorials use literal representation to inform visitors about the memorialized event. Often war memorials will include non-idealized representations of common soldiers that help visitors to understand the conflict. The mass-produced Doughboy statues dotting the country and the 19 ghostly statutes of the Korean War Veterans Memorial, while quite different in quality, are both quietly ennobling tributes to the ordinary men who fought those wars.

Rhetorical memorials communicate a message to visitors, particularly future generations. These memorials use symbols and idealized forms to elevate the subject matter and impart a message about values to visitors. The Lincoln Memorial stands out as an example of this category. The memorial was modeled after the Parthenon, Athens’ temple to its patroness, Athena.

Inside the sanctuary, Lincoln sits like a republican Zeus. The massive statue by Daniel Chester French depicts Lincoln in stern contemplation, one hand clenched, the other open, symbolizing conviction in war and compassion in peace; the arms of his chair are adorned with fasces, bundles of sticks that served as Roman symbols of executive authority. The memorial is a place of veneration for a man who led the forces of good in a bloody struggle for the nation’s soul. In that context Lincoln appears more like the god of a civic religion than an Illinois railsplitter. That message is intended.

Of course, all memorials communicate a message to visitors, elevating or not. The Vietnam War memorial is a dark wound on the National Mall. It is a place of mourning and a statement about the nation’s conflicted feelings about that conflict—and especially of the condemnation of the war by the nation’s urban and cultural elites. The memorial gives no indication that the soldiers whose names are etched in its tombstone-like wall died in service of a cause. The message is unmistakable, and it will shape the perceptions of future generations.

What message will the World War I memorial send? And how will this message be communicated? Like Vietnam, Americans’ views toward World War I are ambivalent. Famously, the war inspired a wave of unremittingly bleak art and philosophy, especially in Europe. According to Edwin Fountain, the vice chairman of the World War I Centennial Commission, the consensus is that the war is "too ambiguous" to memorialize simply as a victory. A memorial to the dead and the ideals they fought for is considered more appropriate. The battle line seems to be drawn, then, between those who prefer this modest message to be communicated traditionally—through the dignifying forms of literal representation and classical architecture—and those who want to make an artistic statement.

That brings us to the five finalists for the World War I memorial—four modernist, and one classical in style. 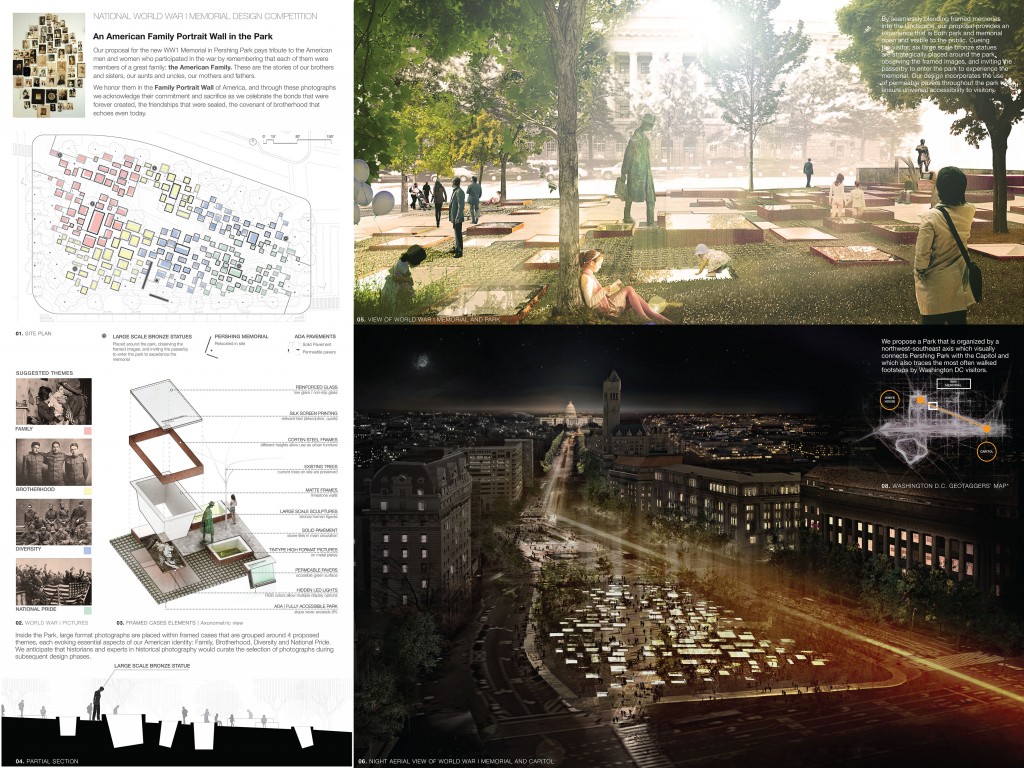 "An American Family Portrait" features the photographs of soldiers and their loved ones set into the ground and lit by LED lights hidden in the frames, like a softly glowing graveyard or Dead Marsh.

"Plaza to the Forgotten War" features a grid of 1,166 illuminated markers, each representing 100 deaths in the war. Bronze pillars lining the plaza’s pedestrian walkway evoke "the cold metal-clad machines responsible for much of the war’s destruction."

"Heroes’ Green" features rolling earthworks that symbolize the war’s "iconic landscape of trenches and craters"; copper walls embedded in the earthworks will depict scenes from the war using Ben-Day dots, the printing technique used by pulpy comic books and popularized by the art of Roy Lichtenstein.

"The Weight of Sacrifice," a design clearly inspired by the Vietnam memorial, features a dark wall with scenes of battle carved in low and high relief throughout—"a shadow of the great tirade amongst continents, oceans, and skies" according to the unintelligible language accompanying the design.

"World War One Memorial Concept," the only classical design of the five, features a victory tower on a rusticated stone bluff, with a grotto at its base. The tower is dedicated to the determination and sacrifice of American soldiers. 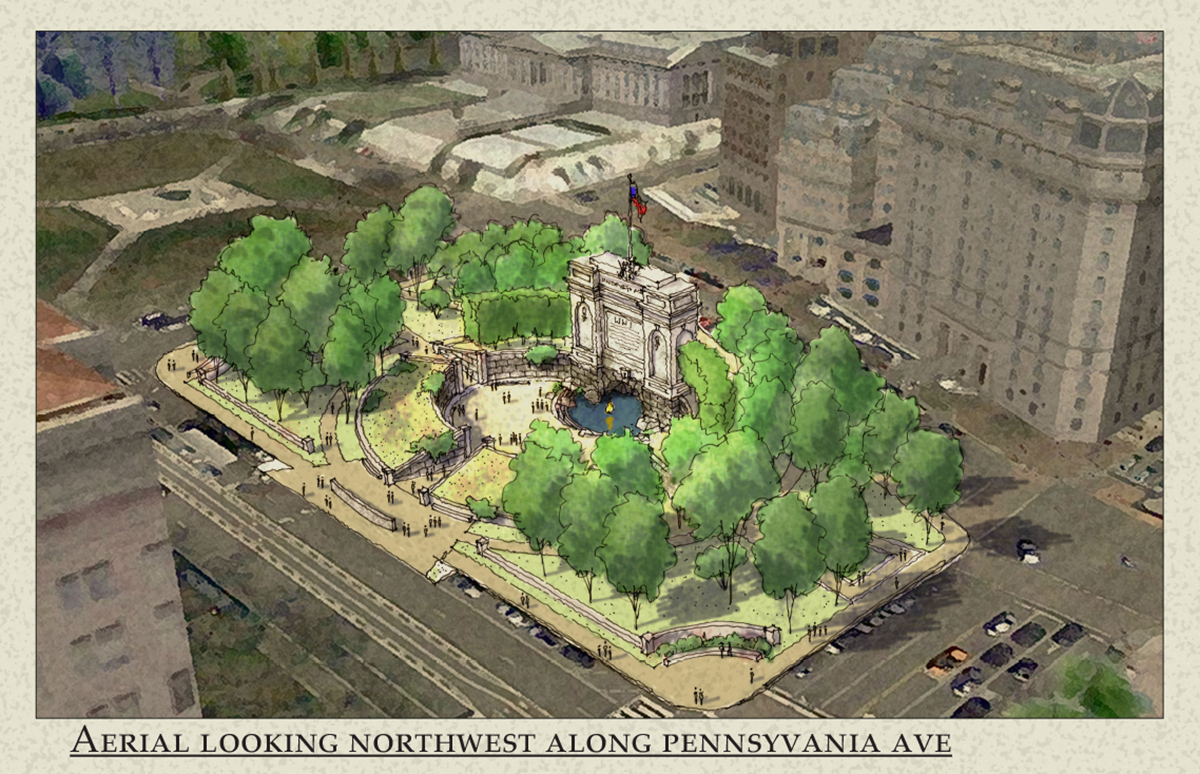 One design out of the five will be selected in January. When completed, the D.C. World War I memorial will stand alongside the Liberty Memorial—that spontaneous outpouring of Missourians’ charity and grief—as the second national monument to the Great War. Our contribution will say something about the war. It will also say something about us. But what?