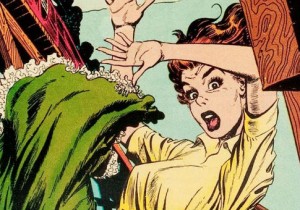 It’s not all drawings of frightened women with howitzer-shell breasts that strain against their blouses as they struggle in their captors’ grip. Well, mostly it is drawings of women with absurd figures, surrounded by phallic symbols. A powerful undertow of sexuality ran through the comic books of the 1950s—and a sick sexuality, often enough, with hints of rape, voyeurism, and sadism lurking just beneath the surface of the colored panels.

We can natter on about how comic books, in their golden ages, deserve a place alongside the high art of the culture—as maybe they do, the high art of the second half of the 20th century was not always much to write home about. But don’t let anyone tell you that a steady current of prurience and perversity wasn’t what tugged along the tales in something like EC Comics’ Shock SuspenStories.

Don’t let Stephen Spielberg tell you, for example. EC Comics was the publisher of such story-driven comics as Tales From the Crypt and Weird Fantasy—to say nothing of Mad magazine, begun in 1952, the same year publisher Bill Gaines and editor Al Feldstein added Shock SuspenStories to their stable. Intended as an anthology comic, collecting several "Jolting Tales of Tension" in each issue, Shock SuspenStories ran through 1955. And now, a publisher called Dark Horse has decided to reissue those comics in book form, with a foreword by Spielberg, who resolutely ignores the themes of ugly sex that run through the stories, while insisting that Shock SuspenStories represents serious, legitimate art.

That’s not to say that Spielberg is entirely wrong about the other force that drives this kind of story. The American comic book, as a genre, had more to it than lasciviousness and lechery. It had a desire for mythic figures, as well, and a genuine sense of archetype.

The creation of enduring fictional characters is difficult, and it doesn’t correspond perfectly to writing skill. Memorability, unique identity, the simultaneous creation and fulfillment of a type: There have been many great storytellers who’ve lacked the talent, and a surprising number of second-tier writers who’ve possessed it. After the works of Shakespeare and Dickens, the greatest collection of enduring characters in English fiction came during the gaslight era of late Victorian and early Edwardian stories. There’s a reason the Dracula vampire and the Sherlock Holmes detective have been staples of movies and television for the past twenty years.

There’s a similar reason that old comic books have been the basis of dozens of other recent movies and television shows. The next greatest set of attempts to create character archetypes in English-language fiction came with the comic book boom that started in the 1940s and ran through the 1980s. From Superman to Batman, Iron Man to Spider-Man, the comics aimed at tales of heroes and villains with which higher-level fiction was growing increasingly uneasy.

The vision of EC Comics was curiously less character-driven than the vision of such rivals as DC Comics and Marvel. But, as these reprints of Shock SuspenStories show, that didn’t stop Gaines and Feldstein from being just as determined to dwell in a landscape of archetypes and well-established tropes. The stories collected in any one issue were uneven: a hit-or-miss mélange of short, unconnected tales drawn with only minor differences from the received comic-book manner by such cartoonists as Jack Kamen, Jack Davis, Joe Orlando, Graham Ingles, and Wally Wood, and inked in (quite well) by the house colorist, Marie Severin. Only with several issues gathered in a single volume can one discern that the unifying theme, the archetype at which they aim, is the old one known as poetic justice.

So, in one story, the head of an orphanage bans Halloween celebrations—only to have a murderer hide parts of his mutilated body in a jack-o-lantern. A hunter, proud of his bearskin rug, is (were you in any doubt?) skinned and made into a rug. A lumberjack uses his fists to beat a rival into blindness, and the victim, unable to see, later accidentally kills the lumberjack with an errant stroke of an ax. "The Neat Job," a hilariously overwrought tale, features a woman psychologically and physically beaten down by her brutish husband’s demands that she be neater and better organized—so she cuts him into pieces, which she stores in neatly labeled jars. When a story opens with a man shouting at his workers that they have "no guts," you just know that disembowelment is waiting for him in the story’s final panels.

EC Comics always had a preachy side, and the format of Shock SuspenStories allowed Gaines and Feldstein to indulge the right feeling of the era’s liberalism in a good number of the eight-page stories. So, for example, "The Patriot!" is interesting as a historical relic, a boilerplate bit of anti-anti-communism, with a man mistaken for a communist and beaten by a mob. "The Guilty!" mocks Southern racists, "Confession" attacks big-city police brutality, and "Hate!" takes on anti-Semitism. (The exclamation point was nearly mandatory for a Shock SuspenStories title.)

Even in the preachy tales, a theme of poetic justice—or, at least, a theme of ironic inversion—defines EC Comics’ work. There’s a kind of forced neatness of conclusion to even the schlockiest of the stories. The good are not always rewarded, but the wicked are always condemned. To read these early issues of Shock SuspenStories is to see the lurid and the garish fighting a great battle against established morality. The comics were denounced on the floor of the U.S. Congress for their sensational content, but to page through them now is to find their titillation a slight thing—easily overwhelmed by the comics’ conventionality and determination to claim the moral high ground.

Stephen Spielberg and Dark Horse Books clearly overvalue Shock SuspenStories. The only thing more ridiculous than some of these stories is the sight of anyone insisting that they’re filled with great artwork, great storytelling, and great characters. But if readers move their judgment down the scale to comic books, EC Comics was aiming at something interesting in the 1950s.

Like the horror stories in the Tales From the Crypt series—like the absurdity of Mad magazine, for that matter—the lurid tales in Shock SuspenStories represented the company’s effort to find a path that led away from the superhero genre that dominated the market. It failed. The success of Robert Downey Jr. playing Iron Man in the movies won’t be echoed in films made from EC Comics’ hero-less stories, and the typical plots of those stories would be laughed out of a script meeting for even a B-grade horror film.

But the effort itself was worth a try back in the day and remains interesting even now. Besides, who doesn’t want to read archetypal stories of bad guys who get their comeuppance—illustrated by drawings of 1950s women with howitzer-shell breasts?