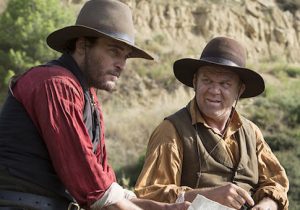 Eli and Charlie Sisters (John C. Reilly and Joaquin Phoenix, respectively) announce themselves early on in The Sisters Brothers. The camera focused on a stretch of dark prairie land, we hear them announce themselves ("We’re the Sisters Brothers!") before demanding that those holed up inside toss out whoever it is they're hiding unless they want violence to commence. Violence, of course, commences, and the brothers Sisters kill everyone inside.

The light outside is negligible, save for the sparks fired off by the guns. The light inside is muddy and unclear, as one might expect in a land untouched by civilization. The first real, bright image we see is a starkly horrifying one: a horse, on fire, streaking through the grass outside the home. The visual shocks the brothers into a moment of silence, and causes Eli to go sprinting into the blazing barn where a whole stable of four-legged conveyances is going up in flames.

Writer/director Jacques Audiard gives us a sense of the two in these moments: Eli, appalled, rushes in to save them, a precursor to the companionship he finds with a broke-down horse later on in the film; Charlie, cold and uncaring, shouts after his brother to not bother. They're just horses, after all. Why risk anything to save them?

Charlie better understands the nature of the two, and Audiard gives them enough rope to hang themselves: They're killers, pretty skilled and feared ones, and whatever they choose to blame their current state on—debts to their boss, The Commodore (Rutger Hauer); a dad who beat them and abused their mother—nothing will change that fact. Less certain of his fate and station in life is John Morris (Jake Gyllenhaal), a rich kid from the east driven west by his disgust for his patrician roots. He's chasing down Hermann Kermit Warn (Riz Ahmed), a penniless chemist who believes he has discovered a formula, one desired by the Commodore, that will allow gold to be revealed with ease.

The Sisters Brothers are to get that formula, by torture if necessary. Morris is to hold Warn until they arrive. And the interactions between these four men make up the meat of the film: the brothers at war with each other and themselves; Warn convincing Morris that money is not necessarily the root of all evil, but scarcity is a cancer; and the utopians selling the brutal realists on their peaceful vision for the future.

How much you care for The Sisters Brothers likely depends on how much you value acting over story. The plot is threadbare; the story, such as it is, relatively uninteresting. It is amusing to see the rise of boomtowns—from camps to outposts to the bustling Babylon of San Francisco—but the thematic implications aren't really teased out. We aren't given much reason to care about the goals these men are trying to achieve and the whole endeavor kind of peters out toward the end, closing with a rather limp suggestion that the Sisters brothers' mother is the key to solving their sadness.

As an acting showcase, however, there is much to love. Gyllenhaal remains one of our most fascinating leading men: from twitchy loners in Nightcrawler and Prisoners to self-possessed, driven men in Nocturnal Animals and The Sisters Brothers, to truly goofball weirdos in Okja, there seems to be little he cannot do. John C. Reilly leavens his seriousness with solid comic timing, but it's always nice to see him adopt a darker edge. There's a melancholy to his Eli, an awareness of his own wickedness and an understanding that the world might not let him stop doing what he does best, kill people. Phoenix's barely restrained rage works well here, as does Ahmed's wide-eyed earnestness.