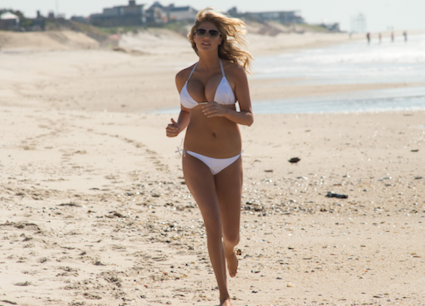 Apologies to Jon Landau and The Boss, but: This week I saw film’s future, and its name is Kate Upton.

Given the Washington Free Beacon’s status as the Internet’s premier warmongering Kate Upton blog, you may think there’s something in my contract requiring me to praise this film. You’d be wrong—we don’t have contracts. Nonetheless I understand the suspicion. Allow me to assure you: My praise is entirely warranted and entirely genuine.

The Other Woman is not a great movie. I’m not the target demo, of course. The middle aged women who attended the preview screening of this film about a cad and the three ladies—his wife, Kate (Leslie Mann); his mistress, Carly (Cameron Diaz); and his beach bunny, Amber (Upton)—who seek revenge on him for triple-timing them seemed to really enjoy it, despite the fact that it doesn’t make a ton of sense.

Mark, the scummy husband, (Game of Thrones’ Nikolaj Coster-Waldau), is written unlike any cheating husband I’ve ever seen. He is actively excited to meet mistress Diaz’s father and friends. He celebrates their eight-week anniversary, engages in pillow talk with her as she tries to work, and plays the part of a fawning boyfriend to a tee. It’s odd.

Meanwhile, Carly and Kate become best friends. United by their hatred of Mark, giving him the double cold shoulder, the pair plot to trap him in the midst of a third fling at the Hamptons. After a rather weak attempt at Buster Keaton-esque physical comedy, the dynamic-but-middle-aged-duo find out why the man has managed to get along without their touch. He’s found a new honey. He’s found Kate Upton.

Amber’s introduced in classic cheesecake fashion: a slo-mo shot of her flipping her hair and running on the beach. It’s like something out of Baywatch, but better. However, we quickly realize that she’s more than a pretty face—her sparkling personality shines through the screen, markedly improving the simplistic script, shattering the weary cynicism projected by ice queen Carly and breathing new life into heartbroken hausfrau Kate.

The film picks up after Upton’s introduction, which comes almost an hour into the film. Amber’s unflappable joie de vivre is infectious—Kate’s rapport with the beautifully built beach siren is accurately described as an "insane girl-crush" by Carly.

In this, Upton brings to the screen the very quality that has made her a superstar in real life. Despite her obvious sex appeal—and the resentment that generally invites—Upton has managed to charm women and men alike. She’s like the anti-Anne Hathaway.

For all of the weaknesses in the script, which is clichéd and dull from time to time, the filmmakers have done one thing right: They’ve played to Upton’s strengths.

Some will dismiss this role as mere typecasting. They will say that Upton isn’t acting, that she’s just projecting her natural sensibility onto the celluloid.

This criticism is understandable but unfair, and possibly even sexist. No one dismisses Ben Affleck’s performance in Dazed and Confused—his first big performance and one that reportedly reflected his naturally bullying personality—as unworthy of praise.

Even if Upton never progresses beyond this early burst of charisma, who’s to say she couldn’t be the female equivalent of Jason Statham, carrying major motion pictures on force of charm alone? Her smoldering, unstoppable sexuality and her natural comfort around a camera lens call to mind a young Brando or Dean. But friendlier!

Upton has no shortage of charm. She has time to develop her acting chops. Hollywood had better look out: There’s a new queen on the block.