Once We Were COVID Hawks

Review: 'The Premonition: A Pandemic Story'

It is hard to remember, more than a year on, the peculiar and uneven way that COVID panic spread. In early 2020, there were two kinds of people: the doves, who insisted that the disease would fizzle out like swine flu and SARS before it, and the hawks, who bought packs of N95 masks and shared snippets of information leaking out from Chinese twitter.

This data came in dribs and drabs because so many in the establishment were such committed doves. Then-president Donald Trump was, but so were the CDC and the FDA, Democratic leaders in Congress, and state and local officials from New York to San Francisco. The few hawks in Congress were abused endlessly by the media, which insisted that they were not merely misguided, but racist. That left concerned citizens to huddle together in email threads, encrypted chat groups, and decreasingly in person, preparing because nobody else wanted to see what they saw.

The Premonition, the latest from author and journalist Michael Lewis, fits awkwardly within the hawk/dove dichotomy in which it is necessarily situated. This is in part because the book's choice of heroes—simultaneously insiders and outsiders—are about the safest, most socially acceptable hawks you could find. But it is mostly because Lewis sees the pandemic as a failure of leadership, not as an indictment of the expert class, which failed not for lack of will, but for its inability to live up to its claimed status.

Many of Lewis's books follow a formula: deeply reported character sketches of men and women who garner startling insight by rejecting accepted wisdom in favor of what cold, hard facts and logic say. He did it for baseball (Moneyball), the Great Recession (The Big Short), and the science of decision making (The Undoing Project), among other topics. The Premonition is an effort to do the same for the coronavirus pandemic, a topic suited to Lewis's preferred approach.

Lewis's protagonists are a loose group of public health experts who, over the course of the book, coalesce around their contrarian view of the pandemic's seriousness. There's the scientist dad working on his daughter's pandemic science fair project, the grizzled veterans of the Bush administration's influenza scare, and the California public health officer on whose looks Lewis lingers a bit too long, perhaps pre-casting the movie that will doubtless be made.

Against them are arrayed a bevy of antagonists who seem dead set on letting the pandemic take its toll. Lewis has faced flak on the right for interviews in which he's been pressed to blame the pandemic on Trump. But to his credit, Trump is a less important foe than others, particularly the sclerotic and incompetent Centers for Disease Control, and to a lesser extent the public health authorities in California.

The Premonition is a wide-ranging and at times thrilling exploration of the early days of the coronavirus crisis and the policy blunders that led up to it. It will almost certainly make an enjoyable airport read, whenever people are buying books in airports en masse again. And to its credit, it captures the complacency and cowardice of a bureaucracy more worried about blame than saving lives.

But it stumbles in its deeper estimation of the core lesson of the crisis. Lewis repeatedly emphasizes that what was needed was leadership—leadership to get the CDC moving, leadership to make mass test-and-trace possible, leadership to get every American to comply with social distancing guidelines. Lewis's choice of protagonists makes clear that he still basically believes that our failure was in not listening to the trained class of public health professionals—that we simply needed to listen to different experts. The problem, however, was not with the choice of experts, but rather the elevation of an expert class motivated more by self-interest than by a disinterested study of the data.

Remember, for instance, the expert consensus that travel bans were useless (and probably racist), a claim uncritically repeated by one of Lewis's protagonists. After the success of travel bans in Vietnam and other countries, Georgetown professor Lawrence Gostin, who helped write the international law governing outbreaks, has acknowledged: "[O]ur belief about travel restrictions was just that—a belief. It was evidence-free." That was true 16 months ago—how to explain the near certainty that Trump was flying in the face of "science" by imposing a travel ban last March?

Further examples abound. The Biden administration's most recent about-face on public masking—allegedly motivated by a nonexistent "evolution" in the science—is part of a long arc of dissembling from public health leaders about masks, even though the actual evidence as to the magnitude of their efficacy remains sketchy at best. And never forget the sheer insanity of public health "experts" insisting that while churches and businesses should be closed, there was no danger to tens of thousands of people marching in close quarters, day after day, to protest the police.

When it was most needed, indifferent expert knowledge was revealed as mostly a convenient political cudgel. Anyone who dissented from guesswork—who argued, for example, that the virus may have leaked out of the Wuhan Institute of Virology, or that the evidence favored reopening schools—was tarred as a bigot and a murderer who did not believe in capital-s Science.

What was apparent to the corona hawks in December 2019 should be apparent to everyone now: The leaders of our public health system are not disinterested and all-knowing experts, but career bureaucrats whose wild guesses as to how to fight the pandemic were motivated more by their haut bourgeois politics than by the data on the ground. Though they were cast out for their heterodoxy, Lewis's protagonists were first complicit in the system. The problem wasn't the lack of leadership—it was the people being led.

One wishes fervently for a book about the real hawks: the no-blue-check, anonymous posters who poured thousands of hours into crunching data and producing visualizations in their basements, who thought COVID would be bad because the powers that be said it wouldn't. They knew what Lewis's heroes, and everyone else, had to learn slowly and painfully: The experts are not here to save you. 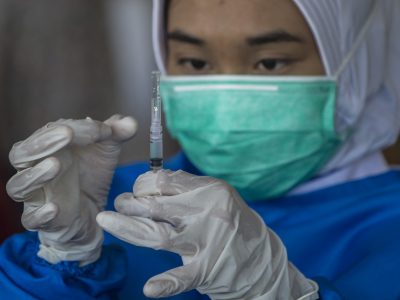