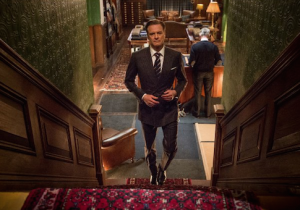 If Kingsman: The Secret Service were a cocktail, it’d be one part hero’s journey, one part spy spoof, and one part super-stylized action flick, seasoned with a dash of ultra-reactionary bitters and served in a double rocks glass, ice-cold.

We open on a military raid gone wrong, a recruit for some sort of special forces outfit dying as a result of Harry Hart (Colin Firth) failing to check a prisoner for weapons. That dead recruit’s son grows up to be Eggsy (Taron Egerton), a troublemaking chav with a penchant for parkour and no compunctions about ripping off a gangster’s car and going for a joyride.

Hart bails Eggsy out of prison following the grand theft auto and tries to convince him to quit blaming others for his troubles, to quit making excuses for his wasted life. And then, after laying waste to a group of punks threatening he and Eggsy in a most-ungentlemanly manner, Hart offers him the opportunity of a lifetime: to become a Kingsman.

The Kingsmen are members of a nongovernmental organization of super-spies who take on the knights of King Arthur’s round table as their codenames. Hamm is Galahad, and he’s looking for a new Lancelot. The previous titleholder was killed while trying to rescue a university professor from a kidnapping by tech billionaire Valentine (Samuel L. Jackson), who has plans for world domination. The film alternates between Eggsy’s training sessions and Galahad’s efforts to get to the bottom of Valentine’s plot.

Director Matthew Vaughn brings the same frenetic-yet-followable aesthetic he cultivated in Kick-Ass to the action sequences in Kingsman. The highlight comes at the end of the film’s second act, during which Galahad, in a series of long takes, quite fluidly dismantles an entire church worth of hatemongers to the strains of "Freebird." There hasn’t been a more appropriate use of pop to provide an anthem for carnage since Scorsese paired "Layla" with Jimmy Conway’s reign of terror.

Just as Kick-Ass served as a satire of comic book flicks while also lovingly appropriating most of the genre’s tics, one gets the sense that Kingsman’s craftsmen aren’t quite sure if it is an out-and-out parody of the super spy genre or a loving homage. That does not diminish the movie’s value, however: Kingsman’s deft blend of comedy and combat render it an early contender for best action film of the year.

It’s also a contender for most conservative—nay, most insanely reactionary—film of the year. (Spoilers below.)

To wit: The movie’s villain is a billionaire who is obsessed with global warming and hopes to help save the world by culling billions of people, thus alleviating our pressure on Mother Gaia. This crazy billionaire is allowed to get away with his evil, murderous plot because he convinces—not kidnaps and threatens and cajoles, but convinces—the world’s political leaders (including Barack Obama), its wealthiest individuals, its academics, and its most famous artists that violently murdering the masses is the only way for the species to survive the calamity of climate change. It’s like a Davos of Death, an Aspen Ideas Festival of Cruelty.

It is also an explicitly reactionary text in its rejection of democratic politics and its support for a benevolent monarchy. In one scene, Valentine is shown having dinner with the prime minister and princess of Sweden. After being informed of the billionaire’s plot, the PM is cool with it but the princess aghast, so Valentine has her kidnapped and her bodyguards killed. Valentine asks the PM if he is okay with this bit of violence, and the elected official laughs. "Eh, I’m a republican," he shrugs.

This is a movie that conspicuously celebrates gentlemanly virtues, mocks a plan to give everyone free access to the Internet, and sees a component of Ronald Reagan’s SDI save the day. This is a movie that tells its protagonist to quit blaming others—the system, his mother, his friends—for his problems and to take responsibility for his actions and his life. This is a movie that posits the only people capable of saving the day are a group of aristocrats who operate a private peacekeeping organization free of constraints imposed by bureaucratic meddling or the need to coddle our enemies.

This is a movie unlike any other you’re going to see this year.