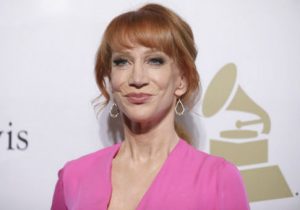 Stand-up and television comedienne Kathy Griffin recently did a photoshoot of herself holding the severed head of President Donald Trump.

Griffin posed with the head "during a photo session with famed photog Tyler Shields, who's known for edgy, shocking pics," TMZ reported Tuesday.

"During the photo shoot, Kathy joked that she and Tyler would need to move to Mexico once the pics got released, for fear they'd be thrown in prison," TMZ added.

Shields previously courted controversy for a 2011 photoshoot with "Glee" actress Heather Morris showing her smiling while tied up with a bruised eye. Shields apologized after critics charged that the shoot made light of or celebrated domestic abuse.

Griffin likewise has a long history of controversial behavior, as well as outspoken liberal activism. The self-described "D-lister" famously made headlines during CNN's 2013 New Year's Eve broadcast for groping co-host Anderson Cooper and simulating sex acts. Griffin has been invited back to host every year since.