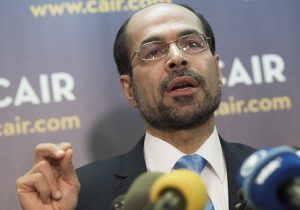 Harvard University's largest student-run organization will bestow a prestigious award Friday night on the founder and executive director of the Council on American-Islamic Relations (CAIR), which has ties to extremist and terror organizations.

The Phillips Brooks House Association (PBHA) will be giving its Robert Coles "Call of Service" award to Nihad Awad, for his work to "defend the rights of Muslims" and for advancing "justice and mutual understanding."

An online petition with over 500 signatures outlines the concerns some have with Awad, including the fact that he and the organization he created were named as unindicted co-conspirators in the 2007 Holy Land Foundation terror-financing case. Five Holy Land Foundation executives were found guilty of funneling millions of dollars to the terror group Hamas.

Awad also explicitly stated his support for the "Hamas movement" during a 1994 speech, write the petitioners.

Prior to founding CAIR, Awad worked as the public relations director for the Islamic Association of Palestine, which the petition notes was directly linked to the Muslim Brotherhood.

"While CAIR presents itself as a civil rights organization defending Muslims from discrimination, Awad's organization has been criticized by many Muslims for claiming to speak in their name," write the petitioners, citing a Gallup poll that showed fewer than 15% of Muslims think of CAIR as their voice.

Zainab Al-Suwaij, cofounder and executive director of the American Islamic Congress, said she was surprised a liberal university would give such an honor to an organization with CAIR's history of ties radical Islamism.

"Especially considering the moment we are in right now, where we are all concerned with violent extremism and radicalization, in particular that of radical Islam," said Al-Suwaij.

Al-Suwaij said she doubted any malice on the part of those who had decided to applaud Awad, chalking it up to ignorance.

"But they had to educate themselves about the history of who they are dealing with," she said.

Al-Suwaij believes her organization, founded in the wake of 9/11 following what she described as disappointment with the her community's "very defensive response," is more representative of the average American-Muslim than CAIR.

"We have no history of supporting political Islam, and we don't share CAIR's victimhood [mentality]," she said. "CAIR jumps at every occasion to play the Islamophobia card. We don't."

A CAIR spokesperson did not respond to request for comment by press time.

Hillel International, one of the world's largest Jewish campus organizations, sent a letter to Harvard President Drew Faust on Friday, urging her "to do whatever possible to reverse or speak out against" the PBHA decision, and for the student group to rescind the award.

"To honor Mr. Awad with such a prestigious award validates and glorifies his extremist views and actions, and provides him a prestigious forum to further his harmful oratory," reads the letter, signed by Hillel International president and CEO Eric Fingerhut.

"We do not seek to ban any speech or speaker, but neither will we stand by when an institution as esteemed as Harvard honors a supporter of terrorist organizations and provides him with a prestigious platform to espouse his hateful views," continues Hillel. "Until now, PBHA has developed a sterling reputation for public service. With its choice of honoree this year, PBHA is applying its good name and reputation to a normalization or countenance of support for terror. It is wrong for PBHA to teach by way of example that support of terror can be accepted or ignored."

Rabbi Jonah Steinberg, executive director of Harvard Hillel, wrote on his blog that awarding Awad "is dismaying—and more than that, it is truly dangerous."
Steinberg wrote that while he has "strong distaste for McCarthyism, slander, and conspiracy theories," he believes in this instance the complaints of Awad's detractors are justified.

The award is named for a Harvard trustee and faculty member.

PBHA and Harvard spokespeople did not respond to requests for comment by press time.

Update: Ibrahim Hooper, a CAIR spokesperson, responded to an email with questions about Awad's background with a link to the Society of Professional Journalists' Code of Ethics and a line from the Quran, "Show forgiveness, speak for justice, and avoid the ignorant."