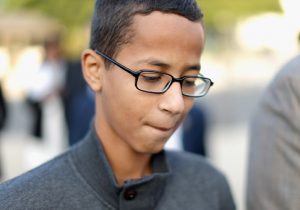 "Clock Boy" Ahmed Mohamed's lawsuit against the city of Irving, Texas and its school department has been dismissed nearly two years after it was filed.

Mohamed made national headlines in 2015 when the then-14-year-old brought a home-assembled clock to class at MacArthur High School in Irving. His teacher, believing the device to be a bomb, reported it to the school principal, who called the police.

Irving police took Mohamed into custody and interrogated him, believing he intentionally tried to cause a bomb scare. No charges were ever brought, but the case received widespread media attention because of the allegation Mohamed was singled out for his Islamic faith.

In August 2016, Mohamed and his parents filed a federal lawsuit claiming that his rights had been violated by the city and school's actions. A month later, he sued a number of conservative pundits–including Glenn Beck and Ben Shapiro who had questioned his side of the story–and demanded an apology.

The lawsuit against the conservative pundits were all dismissed with prejudice on First Amendment grounds in the following months, with Mohamed's father forced to pay attorney fees. On Wednesday, his suit against the city was also dismissed by a federal judge.

The city of Irving told the Dallas Morning News that it is "extremely pleased by the court's ruling, which supports the justifiable actions taken by the officers in the matter."  The city added it remains "committed to ensuring the safety of all Irving residents and schoolchildren."