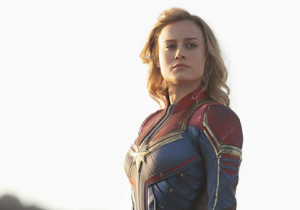 Plot points for Captain Marvel will be discussed below.

Captain Marvel is a big bowl of mediocrity, a soup comprised of an underwhelming, lightweight lead saddled with poorly edited action scenes that's set to a disastrously-on-the-nose soundtrack in service of a script that offers little in the way of deviation from the comic book movie mold, with a few winning bit performances that keep the thing from being a total waste of your time.

Indeed, the most emotionally resonant moment in the film came during the opening credits. The Marvel Studios logo, which typically showcases the brand's cavalcade of heroes in a variety of poses, instead featured iconic Marvel mastermind Stan Lee in his various cameos. A title card after the animation read, simply, "Thank you, Stan." It's the closest thing to a genuine sentiment that Captain Marvel has to offer.

What follows is pretty standard superhero origin story stuff. Vers (Brie Larson) is training for battle on the Kree home world, trying to learn to control her powers and her emotions in order to better serve as a warrior against the Skrull hordes. Skrulls are tricky, you see: they can shapeshift, able to mimic anyone they lay eyes on. The Kree are trying to wipe them out for … some reason. General ickiness, I guess.

Yada yada yada, Vers winds up on Earth—a planet that, for some reason, seems very familiar to her. And to us, given that it's Earth ca. 1995. Look at the Blockbuster Videos! Marvel at the payphones! Gaze upon the two-way pagers that mark the height of technological sophistication!

It is on Earth that Vers meets Nick Fury (Samuel L. Jackson), Agent of SHIELD, and Talos (Ben Mendelsohn), Skrull general. It is also on Earth that she learns her name is actually Carol Danvers and that she is Strong and also that she is Powerful and definitely that she Doesn't Need No Man Telling Her To Smile Because That Is The Worst Thing You Can Say To A Lady.

What she doesn't learn, sadly, is how to be an interesting onscreen presence. There's nothing remarkable or unusual about Danvers, nothing that gives us a reason to cheer for her. She's a null set, a blank, a hero whose heroism stems from nothing. Reinforcing this blankness is Brie's affect, which is charmless and stiff. She's just kind of awkward, her lack of charisma and screen presence only made more obvious when compared to the wattage thrown off by Jude Law (who plays her Kree handler, Yon-Rogg), Samuel L. Jackson (who shines through the de-aging wizardry previously used in Captain America: Civil War and Ant-Man and the Wasp), and Mendelsohn (who manages a more emotionally authentic performance despite being buried under layers of makeup and prosthetics).

The biggest problem with Larson's performance is that her voice, simply, has no presence. It doesn't resonate; it just drifts off into the ether. She lacks the steel of Angelina Jolie (Wanted) or Sigourney Weaver (Alien), the exotic appeal of Gal Gadot (Wonder Woman) or Alicia Vikander (Tomb Raider). She doesn't even have the panicked, frayed depth of feeling conveyed by Jennifer Lawrence in the Hunger Games movies. This is to say nothing of her onscreen counterparts, Jackson, Law, and Mendelsohn, three actors with iconic and instantly recognizable timbres. It's telling that Captain Marvel is more interesting when it's focused on Nick Fury or some random Skrull than on the title character.

And yet, still, all of this could be forgiven if Captain Marvel were, at the very least, an entertaining bit of spectacle. Alas, directors/writers Anna Boden and Ryan Fleck seemingly have no idea how to put together an eye-catching action sequence, substituting chaotic cutting for coherent combat. Outside of an initial bit of training between Yon-Rogg and Vers, there's no flow in any of the fights. When they aren't choppily edited, as when Danvers flees a Skrull ship while her hands are manacled, they're shrouded in ugly, obscuring darkness, as when she and her team of Kree warriors assault a planet infested by Skrulls. Don't even get me started on the musical cues, which seem to have been crafted by a radio station intern asked to cull hits from 90s bands with female lead singers. If you don't groan out loud when No Doubt's "Just a Girl" starts playing, you're dead inside.

Worse still is the moment when Captain Marvel fully unleashes her power cosmic. She resembles nothing so much as a half-thought-through anime character, firing energy blasts from her hands at someone else who is firing energy blasts from their hands, the collision of colors failing to convey anything approaching real stakes. By scene's end, Captain Marvel is glowing gold, her hair floating upwards. And I realized what, exactly, this whole enterprise reminded me of.

She's just an off-brand Goku. This movie is a 130-minute episode of Dragonball Z. And Captain Marvel is roughly as interesting—thematically, aesthetically—as a mid-season episode of that long-running cartoon.