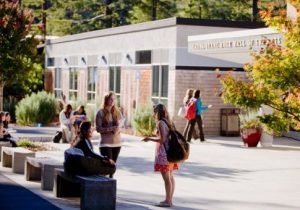 An independent K-12 Catholic school in the San Francisco Bay Area has removed religious statues from its campus in order to appeal to those of other faiths.

Parents and alumni are concerned about San Domenico School's decision to remove a number of statutes and religious icons, especially those of Jesus and Mary, the Marin Independent Journal reported.

"Articulating an inclusive foundation appears to mean letting go of San Domenico's 167-year tradition as a Dominican Catholic school and being both afraid and ashamed to celebrate one's heritage and beliefs," wrote parent Shannon Fitzpatrick in an email to school decision makers.

The loss of tradition and ceremony is a leading reason why families—some of whom are not Catholic—have expressed concern about the change.

"The one main statue that has everyone fired up is the baby Jesus and Mary one," parent Kim Pipki told the Journal. Pipki said the school traditionally held a ceremony where the students would place a crown on Mary's head.

School supporters, however, say that the removal is reflective of the school's "inclusive" future.

Sister Maureen McInerney, prioress general of the Dominican Sisters of San Rafael, told the paper that she was OK with the decision. "San Domenico is a Catholic school; it also welcomes people of all faiths," McInerney said. "It is making an effort to be inclusive of all faiths."

Head of School Cecily Stock noted that while the local community knows San Domenico is Catholic, the school was making assertions that it was not run by the church or an order.

"We want to make sure that prospective families are aware that we are an independent school," Stock said.

"Right now about 80 percent of our families do not identify as Catholic," she added.

San Domenico does not instruct its students in Catholic theology. Director of philosophy, ethics, and world religions Mirza Khan, whose father and grandfather were Sufi Muslim teachers, said that fact is well within the school's Dominican tradition.

"The Dominican teaching philosophy is not to teach there is only one truth," he said. "It is to foster conversation, to intentionally invite in participants that have different perspectives in a very open-ended process of philosophical and spiritual inquiry."

San Domenico was founded in 1850 as an independent, Catholic school—meaning that it is not owned or operated by a parish or religious order.

Amy Skewes-Cox, head of the San Domenico School's board of trustees, said the relocation and removal of the icons is not related to the unrest in Charlottesville, Va. and the debate over the removal of Confederate-era statutes. She called the timing "unfortunate" and said the issues have "absolutely no connection other than it is change, and people have a hard time with change."