When reading for pure pleasure, more often than not I find myself taken by the unexpected, by books that are difficult to categorize. When shopping this holiday season for the reader in your life (all the better if that’s you!) don’t forget to investigate the byways and tributaries of literature published this year, like Tristan Gooley’s How to Read Water, a deeply satisfying book about the behavior of oceans and puddles and everything in between. And would you believe it that one of the most interesting books this year in the weekend pages of the Washington Free Beacon was a history of American eating habits during the depression?

That all said, there is something about the act of giving a book as a gift that seems to call for something weighty—perhaps literally. (The fact that e-books have no weight is among the many reasons you should never give them as a gift.) If you need something bulky with a dash of classical flavor, consider these new histories of the Roman Empire and the Hellenistic Age that preceded it. Just as classical, if a little more slender (and, to be frank, even better written) is Loren J. Samons’ biography of Pericles—which will be of particular interest to those musing on questions of democracy this winter.

Another well-written biography of a historical figure, replete with savage passions, bloody combat, and all the rest of that good stuff, is Tim Blanning’s account of Frederick the Great. Indeed, it was a strong year for European history books with a touch of popular appeal: If this is your thing, consider also Peter Wilson’s history of the Holy Roman Empire and this new account of the Habsburg Empire. For Civil War buffs, two books that stand out are a new one-volume history of the conflict, which elevates the significance of the Western theater and the brilliance of Grant, and a new biography of Sherman.

Continuing in the weighty category: a biography of King Edward VII, a history of the Somme, a new one-volume history of Israel, an epic account of the rise of the modern West, and a wide-ranging history of global finance. For those who are fascinated by the career of Winston Churchill (if you aren’t, you may have stumbled on to the wrong website) check out this account of his early career, in which an escape from captivity during the Boer War launched him to national prominence. Alicia Patterson’s life was not, perhaps, quite as interesting as Winston Churchill’s—but not by much, it has to be said. I suppose you could say the same thing about Patty Hearst, but in a sadder way, as this book about her explains.

America’s decade and a half of wars continues to produce interesting books, like this account of special operations, this graphic novel about a young Marine’s tour in Iraq, and the strange tale of Robert Levinson, a former FBI agent who disappeared in Iran. Books explaining the origins of the Middle East’s problems, or which draw parallels between earlier periods in that region’s history and today, include Michael Doran’s contrarian takedown of Eisenhower’s approach there and a book about an Egyptian spy who worked for Israel. (If espionage is your thing, check out this, about an American communist spy; if espionage literature is your thing, did you know John le Carré published a memoir this year? There is also a new Bernie Gunther novel.) And of course the Middle East isn’t the only region with problems: Victor Cha has a fascinating book out this year about the origins of the current alliance system in the Pacific, and Pierre Manent has taken on the challenge of Islamism in France.

For the danger posed by Russia, and the need for America to lead abroad, Beyond Crimea, The Unquiet Frontier, and The Will to Lead (that last by ex-NATO head Anders Fogh Rasmussen) are all worthwhile reads. For those who can’t get enough about American politics (haven’t we all had enough by this point) there is this bullish new biography of Teddy Roosevelt, this defense of Herbert Hoover, and this account by historian Sean Wilentz of populism in America. That seems relevant—as do this harrowing analysis, by Nicholas Eberstadt, regarding why so many American men aren’t in the work force, and J.D. Vance’s widely discussed Hillbilly Elegy.

Enough politics. Ian McEwan published a fine novel this year, and there is a new translation of Sentimental Education out—which, sorry to say, remains politically relevant, as Flaubert’s novel centers around the events of the 1848 uprising in Paris. Irrelevant and totally delightful are essay collections from Elizabeth Bowen, Cynthia Ozick, Annie Dillard (maybe not totally, that one), and Clive James. Mavis Gallant’s stories from The New Yorker have been collected, as have the later novels of Elmore Leonard. For those who want to immerse themselves in genre fiction, Joseph Bottum has you covered, with guides here to westerns and something called "LitRPG."

Weird, right? I suppose most people probably think reading poetry is weird, too, but if that’s your thing, we won’t make fun of you. If early English poetry is of interest, you should check out this new selected edition of George Herbert’s poems, even if it has some limitations, and this re-issue of John Williams’ classic, contrarian edition of Renaissance poetry. For modern interpretations of the classics, Seamus Heaney’s translation of a chunk of the Aeneid came out this year, and you should also look into Christopher Logue’s War Music. For plain old modernism, there is a new collected edition of E.E. Cummings (I know about the capitalization, I know—and I don’t care), and even though it came out in 2015, the monumental Ricks edition of T.S. Eliot still makes a fine gift. I’d like a copy, if you’re feeling generous!

Contemporary poets reviewed in our pages this year included Håkan Sandell, Ron Rash, Ernest Hilbert, and A.M. Juster. This was also a decent year for literary biography, with books about Julia Ward Howe, Shirley Jackson, and Evelyn Waugh reviewed here—if that last appeals to you, you may as well also check out this history of the English country house between the wars, which our reviewer liked. A lot. There have been plenty of interesting books about the arts, including on painting during the American Revolution, lives of Cocteau and Turner (this last the first volume of what will clearly be the definitive work), and a withering takedown of the modern state of Art by the Wall Street Journal’s Sohrab Ahmari.

On architecture and civic planning, check out these books on utopian modernists, Brutalists, Jane Jacobs, Frank Lloyd Wright and Philip Johnson (this one a dual treatment), and this on the future of the world’s cities. Books about music you might check out include biographies of Paul McCartney, a Julian Barnes novel that revolves around Shostakovich, and this book about Barbra Streisand, a subject about which our reviewer had strong feelings. You might not want to check out Brian Wilson’s new memoir, though the review of it makes for excellent reading—something that also applies to Micah Mattix’s assessment of Bob Dylan’s collected lyrics.

After all, reading the better kind of reviews is one of the best ways to actually get an education these days, considering the nightmare that is the American university—the subject, by the way, of books by Frank Furedi and Peter Lawler this year. In that spirit, we can close on a recommendation that is close to home: Joseph Bottum, our most dedicated contributor of literary essays, has collected a year’s worth of his work for the Washington Free Beacon. It is an e-book, but in this case—this one case only—you should make an exception. Merry Christmas, happy holidays, and happy reading! 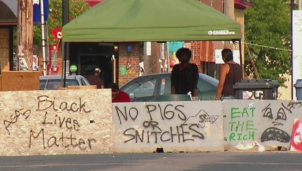 This Week in Leftist Violence and Intimidation Vol. 4