The Democratic operative who was awarded a coronavirus-related contract by Michigan governor Gretchen Whitmer's administration has deleted his website and removed identifying information from social media platforms.

On Tuesday the Whitmer administration terminated a door-to-door pandemic tracing contract awarded to Great Lakes Community Engagement, an organization led by Kolehouse, just one day after its announcement. Within 24 hours of the cancellation, Kolehouse, who was set to take in nearly $200,000 in the deal, took down the website for his consulting firm, K2K strategies, as well as his Twitter, Facebook, and LinkedIn accounts. He did not return multiple requests for comment from the Washington Free Beacon and declined to answer questions about the contract, which would have tasked him with collecting sensitive health data, from the Washington Post and Crain's Detroit.

The oversight effort could spell trouble for Whitmer, who in March emerged as a potential running mate to presumptive Democratic nominee Joe Biden. She has faced intense criticism in recent weeks over a far-reaching stay-at-home order that hurts small businesses. The governor blamed the controversial contract on the state's health department and denied any involvement in the deal at a Wednesday press briefing. Hernandez said the public deserves a thorough explanation of how the state awarded a lucrative contract to Whitmer's campaign consultants.

"If the governor thinks that canceling the contract means we're not going to pursue the questions I asked, that's not going to happen. We deserve to know how this contract came about," Hernandez told the Free Beacon. "We also need to conduct oversight in the legislature to make sure there aren't other contracts going out that are political in nature."

Whitmer's office did not respond to a request for comment.

State filings show that Kolehouse registered his consulting firm, K2K Consulting, in 2012. Both Great Lakes Community Engagement and Kolehouse Strategies are licensed as assumed names of the firm and were created in 2017 and 2019, respectively. Kolehouse has earned more than $750,000 working for Democratic campaigns and liberal ballot initiatives since 2017. More than $570,000 came from Fair and Equal Michigan, an LGBTQ advocacy group. Other clients include the Michigan Senate Democratic Fund and Shri Thanedar, who ran an unsuccessful gubernatorial bid in 2018.

Kolehouse has repeatedly criticized President Donald Trump on social media. In late March he said, "I hope he gets Coronavirus ASAP" and "can someone do the country a favor and cough on that man." Kolehouse was pictured with former president Bill Clinton at a 2016 Hillary Clinton fundraiser in Grand Rapids. 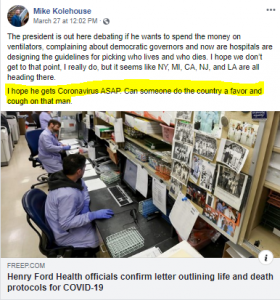 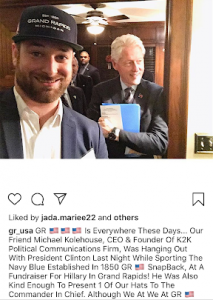 In an interview with the Free Beacon, Hernandez said the administration could have easily found a nonpartisan data firm capable of performing tracking work.

"I've been doing some digging and know that there are other vendors that could have done this, vendors that the state has used in the past that don't have political ties," he said. "We want to know: Did the state follow protocol, did they have a pre-approved list of vendors, and did they pick a vendor that was not on that list?"

A former official in Michigan Republican governor Rick Snyder's administration told the Free Beacon that Snyder started a data storage contract with Microsoft that is still used by Whitmer today and could have been used in the contact tracing project.

"Microsoft CRM is used in the governor's office for storing constituent correspondence and scheduling request correspondence," the former official said. "Whitmer still uses the same system that Snyder started, which would have been in 2011 or 2012." The official said the Michigan Economic Development Corporation uses Salesforce products for similar purposes—the states of Rhode Island and Massachusetts announced partnerships with Salesforce in contact tracing projects in early April.

While Whitmer called contact tracing "an essential part of how we're going to save lives," she said she was not aware of the state's contract on the effort until after it was announced Monday, adding that she canceled it as soon as it was brought to her attention. The state began recruiting volunteers for the effort in late March, and Whitmer was credited with launching the effort by a Grand Rapids ABC affiliate on March 28.

"If it's that big, surely she should have known how it was going to work. During the state of emergency for Flint, we had update calls with the governor every morning," the official said. "PPE status, testing status, contact tracing status, those should have been discussed with her."

The contract fiasco marks the latest unforced error by Whitmer, who has faced mounting criticism since presumptive Democratic nominee Joe Biden said she was on his shortlist for vice president in late March. Whitmer downplayed her chances of securing the nomination during a CNN appearance Thursday.