The Return of Street Corner Conservatism

Column: Donald Trump and the political philosophy of the Deplorables

Richard Nixon was plotting his 1968 presidential campaign when he received a letter from a high school English teacher in Pennsylvania. The correspondent, a young man named William F. Gavin, wasn't certain Nixon would run. But he sure wanted him to. "You can win," Gavin wrote. "Nothing can happen to you, politically speaking, that is worse than what has happened to you."

Gavin cited Ortega y Gasset to explain why Nixon was uniquely suited to lead during the violence and uncertainty of the late 1960s. "You are," he went on, "the only political figure with the vision to see things the way they are and not as Leftist and Rightist kooks would have them." 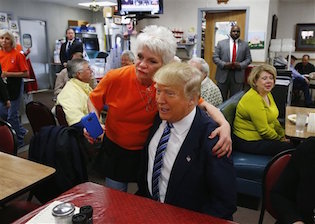 Trump has always been careful to distinguish himself from what he calls "normal conservative." He has defined a conservative as a person who "doesn't want to take risks," who wants to balance budgets, who "feels strongly about the military." It is for these reasons, he said during the campaign, that he opposed the Iraq war: The 2003 invasion was certainly risky, it was costly, and it put the troops in a dangerous position, defending a suspicious and resentful population amid IEDs and sniper attacks. The Iraq war, in this view, is an example of conservative writers and thinkers and politicians following trains of logic or desire to un-conservative conclusions.

Nor is it the only example. Fealty to econometric models, Trump says, has led many conservatives as well as liberals to embrace a "dumb market" that gives mercantilist powers in Asia advantages over U.S. industry and labor. The rush to pass comprehensive immigration reform as a result of the elite consensus that immigration is an unmitigated good set the Republican Party leadership against its own voters. The desire to restrain entitlement spending through cuts rather than prolonging the lifespan of these programs through economic growth demoralizes Republican voters who count on their checks to arrive each month.

The conservatism of Donald Trump is not the conservatism of ideas but of things. His politics do not derive from the works of Burke or Disraeli or Newman, nor is he a follower of Mill or Berlin or Moynihan. There is no theory of natural rights or small government or international relations that claims his loyalty. When he says he wants to "conserve our country," he does not mean conserve the idea of countries, or a league of countries, or the slogans of democracy or equality or freedom, but this country, right now, as it exists in the real world of space and time. Trump's relation to the intellectual community of both parties is fraught because his visceral, dispositional conservatism leads him to judgments based on specific details, depending on changing circumstances, relative to who is gaining and who is losing in a given moment. 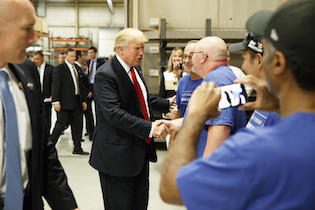 His is a blunt and instinctive and demotic approach arrived at after decades in the zero-sum world of real estate and entertainment contract negotiations. His are sentiments honed by immediate, knee jerk, and sometimes inelegant reactions to events and personalities observed on Twitter or on "the shows." And the goal of his particular conservatism is not adherence to an ideological program so much as it is to prevent the loss of specific goods: money, soldiers, guns, jobs, borders, national cohesion.

This is the conservatism of Bill Gavin who, in his 1975 book Street Corner Conservative, gave voice to the instinctual conservatism of the men and women who populated the Jersey City neighborhoods in which he was raised. "They do not want to overthrow the system," Gavin wrote. "But they are not quite satisfied with the system either. They supported the United States efforts in Vietnam, but at the same time deplored the strategy of piecemeal escalation that led to such a disastrous state of affairs. They are sick unto death with the follies and the arrogance of liberal Democrats, but they have not quite snuggled up to the Republican Party."

The Queens-born Trump, like other street corner conservatives, has never quite felt at home in either political party. And while he went to the Wharton School at the University of Pennsylvania as an undergraduate, he, like other street corner conservatives, lacks the graduate degrees and credentials that establish oneself in society as a professional or as an originator and exponent of ideas. "We were all, I am convinced, conservatives," Gavin wrote of his family and friends. "We never intellectually knew that we were, but instinctively, it seems, we knew that certain people and institutions and places have claims upon our loyalties."

It is this specificity of attachment rather than adherence to a program that explains the divide between street corner conservatives and their political brethren. Many of the conservatives in Washington, D.C., myself included, arrived at their politics through study or experience at university, by encountering a great text, the coherence of natural law, the philosophy of Plato and Aristotle, or the economics of Smith, Ricardo, Friedman, and Tullock. That is not the case for the street corner conservatives. Their stance, Gavin says, "isn’t dependent on arguments from free enterprise, although most street corner conservatives embrace free enterprise. … Neither is it dependent on aristocratic tradition … nor a particular intellectual viewpoint." Nor is it "based on nostalgia for some long-gone golden age nor on some reactionary aesthetic idea."

It is the gut conservatism of someone who does not want to be cheated, who wants to live according to traditional notions of family, community, vocation, and faith, and who reacts negatively when these notions are toyed with from above. It is the politics of a construction worker, a contractor, a technician, a waiters or waitress, a taxi or Uber driver, of someone who is patriotic but skeptical of non-retaliatory and mismanaged foreign interventions, who gives precedence to the practical over the theoretical, the tangible over the conceptual, the concrete over the abstract. Street-corner or commonsense conservatism is more than the set of attitudes, inclinations, reactions, and habits of Bill Gavin or Donald Trump. It is nothing less than the political philosophy of the Deplorables.

Street corner conservatism is most distinctive when set against the conservatism of the Beltway. Economists, for example, can explain in minute detail the efficiencies gained when the supply of labor is global and therefore limitless. They can point to highly sophisticated quantitative models that describe how consumers benefit from the global supply chain and from the offshoring of low wage employment. It all works so well in theory. What the economists are too quick to dismiss, however, is the first word in the old subject of political economy. They prefer not to recognize—or, in some cases, they celebrate outright—the erosion of nationhood by lax enforcement of border controls and immigration policy.

Unilateral disarmament in the face of trading partners that manipulate their currencies and maintain tariffs against U.S. products not only diminishes objective measures of national community and sovereignty, but also carries a human cost in workers displaced, factories moved, communities warped, livelihoods and vocations disappeared. A street corner conservative responds to these dislocations with a sense of outrage, with a desire to rectify injustices that benefit an affluent and aloof elite, and with frustration when his sentiments and wishes and bonds are not recognized by either Republicans or Democrats. 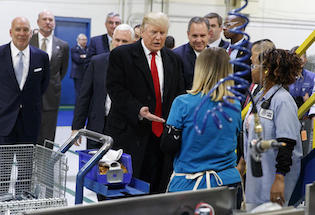 When Donald Trump and Mike Pence arranged for Carrier to retain some of the jobs it had previously announced would move to Mexico, adherents to free market ideology roundly criticized the move as cronyism. But, as has so often been the case this year, these thinkers lacked a constituency. They found themselves defending the economic basis of Walmart rather than the livelihoods of the people who shop there. The Carrier deal was popular not only with Carrier employees but also with voters. It was a textbook example of street corner conservatism: deviation from principle in the pursuit of tangible goods. Arguments from theory or economic calculation had no purchase because the street corner conservative thinks not in terms of producers and consumers but in terms of citizens and foreigners.

Street corner conservatism informs Trump's foreign policy instincts as well. "In our nation’s relations with other countries we want: enough military strength to prevent war; a rational ‘America First’ attitude avoiding the extremes of expansionist jingoism on one hand and isolation on the other; and a cool but correct attitude toward totalitarian dictatorships that have the potential to destroy our nation," wrote Gavin. The street corner conservative is intensely patriotic—to use Trump's word, "militaristic"—and recoils at the humiliation of his nation at foreign hands. For the street corner conservative, the words America First summon thoughts not of Charles Lindbergh but of the pursuit of concrete and visible American interests rather than the expansive defense of the amorphous concept of "liberal world order." He supports overseas interventions in response to attack or, as it initially seemed in Iraq, in the face of grave threat. But when the rationale for intervention changes to the maintenance of the "liberal international system" or the promotion of airy concepts such as "human rights" and "democracy promotion" and the "responsibility to protect," he is far more skeptical. So is Trump. 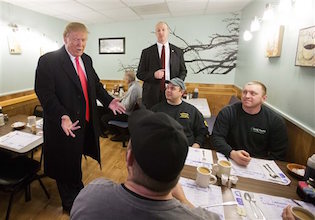 If street corner conservatism is a recurrent temper in our public life, it is also a volatile and easily frustrated one. It found expression in the majoritarian theories of William F. Buckley Jr.’s mentor Wilmoore Kendall; the populist and anti-Establishment rhetoric of Joseph McCarthy, George Wallace, Ross Perot, and Pat Buchanan; the social conservatism of the suburban warriors who fought liberal social policies such as the Equal Rights Amendment, bussing, abortion, and the therapeutic approach to crime, and who played such an important role in the Reagan Revolution. Street corner conservatism has waxed and waned, risen and fallen, a periodic response to social disorder, economic stagnation, and elites who forget that America is not to be ruled from above but driven from below. Street corner conservatism can bring you to office, but it also can turn on you easily when it is depressed or disillusioned or, conversely, enriched and pleased with the state of society.

Politicians who listen to them flourish. "What is it we want?" asked Gavin.

We want a strong country, the strongest in the world because we aren’t going to rely on mutual manifestations of good will to keep this country free. It is a tough world. The liberals think anyone who says that is practicing a false, twisted masculinity. So be it. We have been called everything else by liberals; we might as well be called sexual psychopaths. But at the same time, let’s demand that our nation be so strong that no nation or group of nations will ever dare attack us—or even think of attacking us. …

We believe this is a good country. We believe that our way of life, our values, our adherence to formal religion, to the family, to what Chesterton called the ‘decencies and charities of Christendom’ have for too long been abused or ignored or threatened by left-liberalism. Left-liberalism is intellectually, morally, and spiritually bankrupt. We don’t want it to be replaced by radicalism of the left or right. We want our kids to grow up knowing not only their prayers but their philosophy, our philosophy.

What is it that we want?

Bill Gavin died of cancer last year at the age of 80.

One week later, Donald Trump announced that a street corner conservative was running for president.