Under legal pressure, the University of Illinois at Urbana-Champaign rolled back a "bias response" team alleged to have intimidated pro-Israel students.

Speech First, a nonprofit group that fights restrictive speech policies on college campuses, sued the university in 2019 over policies that the group claimed violated the First Amendment. The university settled with the group this week before Speech First could push for a Supreme Court review.

The lawsuit challenged the university's Bias Assessment and Response Team, which tracked and published anonymous allegations of bias- or prejudice-related incidents. Some students "weaponized" the online bias-incident reporting portal against other students—particularly those who advocated for Israel—according to the lawsuit.

The school’s bias protocols extended to student housing, where students who had allegedly committed a "bias-motivated incident" were subject to censure, probation, community service hours, or mandated classes on "ethical decision making."

Now, students are protected from disciplinary actions from the school’s Bias Assessment and Response Team and can only be punished if their action threatens another student with physical harm or otherwise violates the university's student code of conduct.

Speech First founder and president Nicole Neily, who graduated from the University of Illinois, said the new policy changes defend students from the school's intimidation tactics.

"These policy changes clarify that the university administration may not intimidate students into silence by accusing them of ‘bias,'" Neily told the Washington Free Beacon. "As an alumna, I was particularly dismayed to see an institution that I once loved employing draconian, unconstitutional policies to muzzle speech with which they disagreed—my fellow Illini deserve better, and we are proud that this settlement makes clearer where the school’s authority ends."

The Education Department in November launched an investigation into the university after Jewish student groups brought forward a list of anti-Semitic incidents at the university, including harassment against pro-Israel students and the vandalization of Jewish religious ornaments. 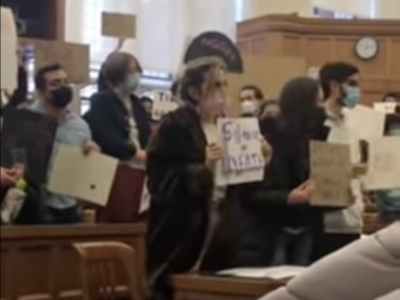