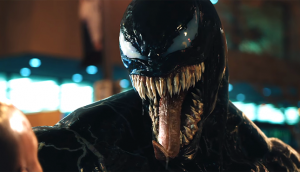 Why is Venom, the alien symbiote who bonds with Eddie Brock (Tom Hardy), named Venom in the movie Venom?

I mean, why does he call himself Venom? Why does another symbiote, this one named Riot, call Venom by the name Venom? I don't mean this in a gotcha, Why are these weird aliens speaking English sort of way, though that question lingers. (Correspondence schools on their home asteroid must have had pretty impressive foreign language programs.) I mean, what kind of a name is Venom?

It made sense for the comic book version of Venom to call himself Venom. After all, the alien symbiote and Eddie Brock both had reason to hate Peter Parker, the Amazing Spider-Man. The webslinger refused to play host to the alien, almost killing it in the process; Brock lost his job at the Daily Bugle after Parker revealed he was a fabulist (or a plagiarist, or something; I'm not looking it up). Together, the pair had a great deal of (wait for it) venom for Spider-Man, whose powers the symbiote was able to ape and nullify, and spiders inject venom into their prey, so the name Venom made sense. It made sense!

Which brings me to my main point: Venom only really makes sense as a character in relation to Spider-Man. He's a fantastic Spider-Man villain, Parker's mirror image, one driven by revenge and hate. He's got great costume design. He's got a solid power set with reasonable weaknesses. But stripped from the world of Spider-Man, Venom is just a goofy guy in a black costume that is way too powerful to be stopped by normal human means.*

That could still work as a movie! Indeed, the best moments in Venom are when Tom Hardy is, basically, treating the film as a one-man buddy comedy. The symbiote tells him to do incredibly outlandish things—eat the heads of villains, for instance; he's got a real thing for biting off skulls and eating them whole—and Brock humorously resists these urges. At one point, the symbiote tells Brock that he doesn't want to go back to his home world because, and I quote, "I was kind of a loser." That's funny! There's something to play with here, an amusing thing that can be done with an out-of-work journalist teaming up with a loser alien, the pair of them becoming more powerful than they could possibly be alone while also still being incredibly weird and kind of dorky.

Hardy is perfectly suited to this kind of role, one in which the camera just kind of rests on him while he talks to himself about the pleasures of eating eyeballs and brains and livers and the such; I'd watch him be weird onscreen all by himself all day long. The problem is, this is only about half of Venom. Maybe. Maybe slightly less. It feels like it takes forever to get to the fun weirdness, which is odd since this movie is only really about 100 minutes long.

So, Venom doesn't really work, as a piece of storytelling. It just doesn't. But … now that we've gotten the introductions out of the way … I'm kind of interested in seeing a sequel? One in which the fun, weird stuff can happen immediately? Is that nuts? It's probably nuts. But no more nuts than making a movie about Venom nearly entirely devoid of the entire reason Venom exists.

*This problem has manifested itself in the comic books for decades now, ever since Marvel turned him into a standalone hero.