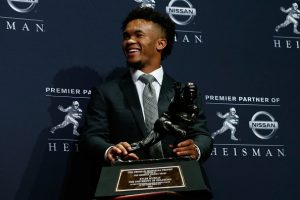 Quarterback Kyler Murray won the Heisman Trophy on Saturday after leading Oklahoma to a College Football Playoff berth. It was a great night for an amazing athlete as he joined one of the most hallowed lists in American sports.

It was also an opportunity for one news outlet to quickly crash the party, via some Pulitzer-worthy Twitter searching. Here's how USA Today leads its rather passive report:

When Murray was 15 years old, he tweeted at his friends (via his since-verified Twitter account) using an anti-gay slur to defame them. Four offensive tweets remained active on his account late Saturday night but were eventually deleted by Sunday morning — when Murray apologized for his insensitive language in a tweet.

If this dreary saga sounded familiar—person enjoying career highlight sees past tweets deemed offensive dredged up—it came right after comedian Kevin Hart got the Oscars hosting gig he called a lifelong dream, then was hit with the dreaded "tweets resurfaced" headlines about old posts construed as homophobic, such as an (unfunny) gay panic one about his son. Hart addressed the matter in a pair of Instagram videos, noting he'd been criticized for those tweets in the past and resisting online mob calls for him to apologize.

He eventually decided it wasn't worth the trouble, stepping down from the job and apologizing to the LGBT community for any offense caused.

Some other recent examples of folks having their One Shining Moment derailed include:

I'm always amused when news reports say the tweets "resurfaced," as though they suddenly appeared like Leo DiCaprio on the beach in "Inception." What happened is not by chance. Reporters or random people went to the Twitter search function, put bad words into the "any of these words" section, punched in the handle of the person who was until that moment having a great day, and voila. They weren't stumbled upon, they were tracked down like a hidden shame time capsule.

Many of the things written by these six men were cringe-worthy, stupid and, in some cases, outright bigoted. And many others are simply song lyrics or movie lines, written by unthinking kids, having no idea they could place them upon the Altar of Public Opinion years later by angry Twitter users and media members demanding contrition.

But David, you might say, don't you believe in personal responsibility? Don't you think that those comments were reprehensible? He TWEETED them. He owns them.

Covering Twitter Sins is fraught with peril, mainly because it is almost impossible to detect the tone or motivation of a tweet, particularly years after the fact. As soon as a no-no word or phrase is uttered, it can be quickly labeled homophobic or racist, even if it's in the context of quoting a song or a movie (Hader, probably the worst offender on the list, had one labeled unacceptable that was him writing "Suck my c—k, I'll murder your family," which is a line from the Will Ferrell movie "Semi-Pro").

It gets more perilous, to the point of silliness, when we're talking about teenagers using social media. It begins to border on vindictive in cases like Murray and DiVincenzo, who quoted a rap lyric, for crying out loud. If these people are truly bigoted at heart, I tend to think that will have manifested itself in matters more severe than in a tweet quoting Meek Mill or crudely calling their friend a "queer."

As for the ones doing the "resurfacing," they are sad souls who get a sugar high out of tearing down accomplished people at career zeniths. They may think they're doing a public service, but they're really just playing God, and doing a poor imitation.

My faith teaches me God is all-forgiving. This isn't about forgiveness. It's about revenge.

Oftentimes when I read sports bloggers and columnists opining on these matters, they usually settle on the mantra that athletes and celebrities should "never tweet." I won't say that, but do so with this cold reality: Tweet knowing you're pursuing the American Dream and there's someone behind a keyboard in your future, looking for any reason to take you down.