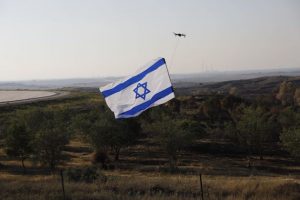 "Boom!" read the headline of a supplement in Israeli weekly Makor Rishon, after two leading politicians, Education Minister Naftali Bennett and Justice Minister Ayelet Shaked, announced on December 29 that they were jumping ship from the Jewish Home Party to create the New Right Party. The question Israeli pundits are trying to answer now is whether that boom—or "blast" as most of the press characterizes it—is an explosion or an implosion. Will it strengthen the national camp or will it bring it to its knees?

The ruling Likud Party wasted little time in slamming the New Right as a threat to the entire right. Prime Minister Benjamin Netanyahu said, "It will break the right into slivers of slivers. Parties won't make it past the electoral threshold." Netanyahu referred to the 3.25 percent of the vote a party must win in order to enter the Knesset. Passing that threshold gives a party four seats. Failing to pass means the loss of all the votes that had gone to that party.

Netanyahu counts on those slivers to build his government. In Israel's parliamentary system, a government must have a majority of at least 61 votes in the 120-seat Knesset. How does Likud fare in the polls? Much better than the others, but still with only 30 seats.

Netanyahu has repeatedly raised the specter of 1992, when a plethora of right-wing parties caused two of them to fail to make it into the Knesset, wasting their votes. The result was a Labor government led by Yitzhak Rabin, which brought about the Oslo Accords, long viewed as a disaster by the right. (It's a view now held by most of Israel's electorate, judging from the fact that no party outside of the extreme Meretz wants to be identified with it.)

Likud fears are more than mere scare-mongering. Polls place two to three right-wing parties perilously close to the abyss, and some analysts estimate that even the loss of one right-wing party is enough to hand the reins of government to a center-left coalition.

In an effort to ensure all of the (now seven) right-wing parties make it into the Knesset, the Likud has launched a campaign to lower the electoral threshold. Ironically, if successful, it would reverse a decades-long process in which that threshold has been gradually raised in order to reduce factionalism. Irony of ironies, Avigdor Liberman's Israel Beiteinu Party ("Israel is Our Home"), which led the charge to raise the threshold, has joined the effort to lower it now that it faces elimination.

Disparate poll results make it hard to judge if Bennett and Shaked made a smart move. With the party only just established and three months to go before the elections, it's impossible to predict, although the Israeli weekly Makor Rishon did just that with its latest poll showing the New Right winning 10 seats. According to Makor Rishon‘s analysis, Bennett and Shaked have "rolled the political dice well" since their former party, Jewish Home, would retain five seats (it currently has eight). Makor Rishon sees Bennett and Shaked effectively doubling their seats, basing this judgment on rumors of a planned reunification of the two parties after the April 9 election.

Bennett and Shaked created the New Right in order to broaden their appeal. Although Jewish Home had hoped to unite secular and religious Jews on a nationalist platform, in practice it became a religious-Zionist party, attracting relatively few secular Jews. What's not clear is exactly where the new party's voters will come from. It's likely the new party will be nibbling votes from all the right-wing parties. But what Bennett and Shaked have really gambled on is that their new party will also take votes from the so-called center parties based on popular personalities, like Yair Lapid's Yesh Atid ("There is a Future") and new parties Gesher and Hosen L'Yisrael ("Israel Resilience"), led by political newcomer and former IDF chief of staff Benny Ganz. (Polls show Israel Resilience winning 13 to 17 seats, a remarkable showing given Ganz's extraordinary campaign strategy thus far of remaining mute on every issue.)

Should April's election lead to a right-wing collapse, Netanyahu loyalists are already laying the groundwork for whom to blame. Likud minister Ofir Akunis put it bluntly: "If, God forbid, this thing happens, all the responsibility will fall on the shoulders of Ministers Shaked and Bennett."

In the short term, perhaps, Akunis will be right. But Dr. Ofir Haivry, vice president for academic affairs of the Herzl Institute in Jerusalem, notes that all the heads of the small, right-wing parties hail from the Likud. Naftali Bennett, Moshe Kahlon, Avigdor Liberman, Moshe Ya'alon, he writes, "came to the conclusion that they weren't wanted there and went their independent way in the hope they would cross the electoral threshold." The reason they left is that their ambitions were thwarted by Benjamin Netanyahu, who apparently views all competitors as a threat to his leadership.

Haivry left off the list Moshe Feiglin, who also heads a new party. If the polls are accurate, Feiglin's party won't cross the threshold and will waste right-wing votes. Feiglin, despite winning a realistic 20th spot in the Likud primaries in 2008, was pushed to 36th due to Netanyahu's intervention.

It only makes Haivry's point more salient. Should the right fail in the coming elections, the ultimate responsibility will fall not on the shoulders of Bennett and Shaked, but ironically on the man who now warns of the danger of so many parties—Netanyahu himself. It was he who propelled all those who showed promise from the Likud and into forming the splinter parties he now so fears.