The Clinton Empire Grows Larger by the Day

Not unlike the Islamic State in Iraq and Syria, the Clinton Political Empire (CPE) is expanding and radicalizing, Politico’s Ken Vogel reports.

In what was described as "a major power play," Clinton minion and loyal Free Beacon reader David Brock is taking over as head of the allegedly nonpartisan (but actually left-wing) watchdog group, Citizens for Responsibility and Ethics in Washington (CREW). Brock was elected chairman of the group last week "after laying out a multifaceted expansion intended to turn the group into a more muscular—and likely partisan—attack dog," Vogel writes.

CREW, which plans to add a more explicitly political arm in order to target Republican politicians, donors, and other enemies of David Brock, is the latest addition to Brock’s stable of aggressive political attack outfits, such as Media Matters, American Bridge, and the recently announced American Independent Institute and American Democracy Legal Fund. "CREW gives us some potentially powerful tools in the tool box," Brock told Politico. "We have been in the accountability for 10 years very successfully. It is kind of a one-stop-shop now."

By "us," Brock is presumably referring to himself and Hillary Clinton, whom he has defended as vigorously as Zoolander fashion mogul/villain Mugatu defended child labor in Malaysia. In fact, the two seem to have a lot in common. Both share a passion for avant-garde hairstyles, and Brock is likely sympathetic to Mugatu’s labor grievances, given his tireless efforts to prevent Media Matters employees from forming a union. 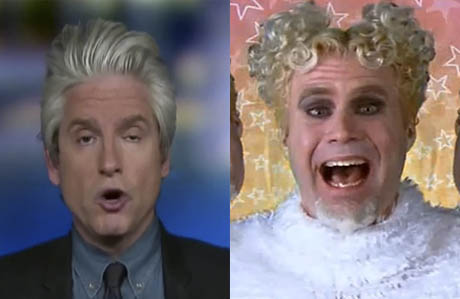 The Clinton political empire, which is funded by some of the largest corporations and financial firms in the world, has been rapidly expanding since Hillary quit her job as Secretary of State. Earlier this year, Clinton mercenaries successfully annexed the pro-Obama Super PAC Priorities USA Action, the group that famously accused Mitt Romney of literally killing a woman by infecting her with cancer.

Brock clearly aims to take CREW—whose nominal commitment to exposing corruption among Democratic lawmakers did not sit well with House Minority Leader Nancy Pelosi and rich liberal donors—in a more partisan direction. Not only did he refuse to say whether the group would continue to pursue ethics complaints against Democrats, Brock also suggested that there is no need to because Democrats are ethically pure. "Our experience has been that the vast amount of violations of the public trust can be found on the conservative side of the aisle," he told Politico.

Brock should have no problem finding rich liberals who are so committed to getting money out of politics that they are willing to give millions to people like David Brock. His groups have a collective budget of about $25 million a year, thanks to his close ties to George Soros and the shadowy left-wing network known as the Democracy Alliance. Brock also has ties to the Obama administration, and is said to closely coordinate strategy with White House officials.

In his personal life, Brock once paid his former domestic partner $850,000 to prevent the leak of damaging information about Media Matters and is reportedly afraid that right-wing snipers are trying to kill him.