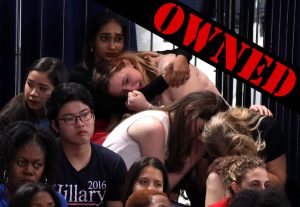 Nikki Haley is wrong. There is no greater threat to the continued prosperity of the American republic than the libs. Here, in no particular order, are five simple suggestions for how you, a conservative patriot, can #KeepAmericaGreat by owning those pesky libs, and making sure they stay owned. Own them now!

1. Wear a diaper on a college campus!

This is the Coca-Cola Classic of owning libs. In case you hadn't noticed, college campuses are crawling with snowflakes who spend entire semesters cowering in safe spaces and getting triggered by "culturally appropriated" cuisine. Show those crybabies who's boss by wearing a diaper on the quad, sucking on an enormous pacifier, and bombarding them with "controversial" ideas, e.g., "terrorism is bad," "the Constitution is good," and "Roger Federer could beat Serena Williams at tennis." Owned!

2. Write an award-winning song about the 2nd Amendment!

Speaking of cultural appropriation, remember when the word "trigger" was only used to describe something cool? As far as libs are concerned, the only good thing about the First Amendment is that it provides legal cover to lib journos who publish hysterical, ill-informed tirades about the Second Amendment. It's a fact that some of the greatest self-owns of all time have occurred when liberals try to make an educated comment about guns. That said, it's almost always more fun to be the one doing the owning, so why not try writing an award-winning song about the Second Amendment? The libs will inevitably try to get it banned as "hate speech," or they'll go lie down in the road at a busy intersection somewhere, or whatever the hell it is they do when they're triggered.

Here, for example, is a beautiful ode to the Second Amendment, "A Taste of Freedom," that I recently found after two seconds of browsing on the internet:

If there's one thing the libs love more than avocado toast and higher-ed indoctrination, it's public transit. At least, they love the idea of public transit. In their dream world, everyday citizens are hauled back and forth like freight in cramped metal boxes between government housing projects and guaranteed jobs at the bread factory. Meanwhile, the Liberal Elites are sipping iced lattes in high-speed air gondolas on their way to brunch.

In reality, libs in big cities such as New York and Washington, D.C., are constantly griping about their dysfunctional public transit systems, and the incompetence of the Democratic administrations who oversee them. This is especially true of liberal journos — the lesser ones, not the limousine elites — who insist on tweeting about their miserable commutes despite the fact that no one cares. Ripping farts on subway cars is guaranteed to trigger them into a frenzy. It might even force them to reconsider their commitment to destroying America. (But probably not!)

Libs love soccer for myriad reasons: it's international, it incentivizes egregious displays of faux anguish, it's low scoring and can end in a tie, America isn't that good at it but France is, etc. Youth soccer leagues are merely fronts for the "education industrial complex" to ensure our children remain indoctrinated in left-wing ideology outside the classroom. Disrupting their games and polluting the so-called "environment" by spewing bulbous clouds of black soot from your Ford F-350 Super Duty Diesel is sure to leave even the most tranquil of snowflakes feeling both triggered and thoroughly owned. Consider this a "global warning," libs!

5. Break into your local art museum and replace all the paintings with George W. Bush originals!

Libs are obsessed with "modern" art because most normal, well-adjusted people think it's stupid. They think they can trigger conservatives by pissing on Jesus, but they won't be laughing so hard after you raid their favorite art museum and replace all that nonsense with original works by Greatest Living President and fantastic painter George W. Bush. That would be sure to give the libs a real "art attack," LOL. An alternative option would be to defecate on the floor, garnish the turd with a tuft of Trumpian fur from a golden retriever, then watch all the libs gather round, take pictures of it on their phones, and marvel at the artist's "courage." Owned!