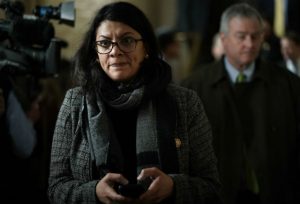 Rep. Rashida Tlaib (D., Mich.) first declared her support for the Boycott, Divestment, and Sanctions (BDS) movement against Israel in December. "I personally support the BDS movement," said Tlaib, the first Palestinian-American woman elected to Congress. She even refused to go on an annual trip to Israel hosted by the American Israel Public Affairs Committee for freshman members of Congress, instead organizing a congressional delegation to the West Bank.

So Tlaib must have been quite embarrassed when the Israel Advocacy Movement, an organization based in Britain, revealed Sunday that an Israeli company built her official campaign website, which she still uses. In a video posted online, the group's founder, Joseph Cohen, shows how the source-code for the website says, "Wix.com Website Builder." Wix, a cloud-based web development platform, was founded in 2006 by developers based in Israel. The company now has 110 million users worldwide.

To clarify, one of America's most public supporters of boycotting Israel uses Israeli technology to support her political aspirations. Practicing hypocrisy is part of the job description for members of Congress, but Tlaib's hypocrisy here is really remarkable. And she is far from the only advocate of the BDS movement to use Wix.

Cohen details how several other anti-Israel activists and pro-Palestinian college groups who call to boycott Israel use websites with the line "proudly created with Wix.com" clearly displayed at the bottom of the page.

"These people are ignorant of the incredible contribution Israel makes to the world," Cohen says. "Israeli innovation makes the world a better place … The world's largest generic drug manufacturer [Teva] is in Israel, as are many medical breakthroughs that save countless lives."

"These hollow threats of boycott are nothing but political stunts that could never be implemented," he continues. "Could you imagine how many millions of people would suffer because they were deprived of the medical breakthroughs and technological advancements that come out of this small nation? What would it be for? It won't bring peace between Israelis and Palestinians. It's simply narcissistic self-gratifying virtue signaling that makes the world a much more divided place."

Tlaib has yet to comment publicly on the Israel Advocacy Movement's revelation.

Perhaps Tlaib was unaware that Israel's dreaded hands helped build her website, although a quick online search would have shown that Wix is headquartered in Tel Aviv. She either knew and is disingenuous about her activism or did not know and does not care enough to do her due diligence. Either way, Tlaib's hypocrisy shows that it is impossible to avoid Israeli products in today's world.

Hundreds of multinational corporations have opened research and development centers in Israel, and many of their key products started as Israeli innovations. It is hard to measure Israel's technological reach because so many of its contributions are below the surface—from Intel Pentium and Celeron computer processor chips for personal computers to chips for mobile phones, and far beyond. Many of Facebook's built-in apps were also developed in Israel. And today, despite comprising a small fraction of one percent of the world's population, Israel receives about one-fifth of global private investment in cyber security. Israeli hands are so embedded in high technology that the two are inseparable. So every time Tlaib calls someone on her cell phone or uses the internet, she is actually perpetuating the occupation.

None of this includes Israeli innovations in other fields, such as drip irrigation, and water and agricultural technology that Israel is providing to developing countries around the world.

Oh, and Israel thwarts terrorist attacks in dozens of countries each year. Should governments and police departments stop working with Israel to improve their counterterrorism efforts?

The great irony is that even the Palestinian leadership cannot boycott Israel. Several of Hamas leader Ismail Haniyeh's family members have gone to Israeli hospitals for treatment, as have members of Palestinian Authority President Mahmoud Abbas's family. Where is Tlaib's outrage?

All of the above shows how sad and pathetic the BDS movement is. The campaign is a rowdy mob that uses threats to try to gets it way, and cheers the most minor of victories—a musician refusing to play a concert in Israel, for example—as if they will make any difference. In reality, Israel is only expanding its economic strength and diplomatic ties.

Yes, the BDS movement is a threat. It is economic warfare against Israel meant to destroy the Jewish state. But the movement's supporters are losing—badly. Too many people, companies, and countries do not have the luxury of being professional activists who spend their days holding up signs and shouting, because they have real responsibilities. And because they have real responsibilities, they recognize that boycotting Israel is just stupid and even dangerous.

A true supporter of the BDS movement, one who is committed, would need to become an effective hermit and live like it's the Stone Age to boycott Israel. If they are not prepared to do that, then they should put down their "Israel = Genocide" sign and look for a productive way to benefit humanity, not a way to hurt it by trying to delegitimize a country that gives so much to the world.