The single greatest decision I made this weekend was not tweeting about the viral video of a group of Kentucky students chanting at Native-American activist Nathan Phillips at the March for Life. I felt the same way most Americans did; it was disgusting to watch the kids surround and mock a veteran who did nothing wrong.

But then additional videos emerged, via which it became clear the students were relentlessly mocked by nearby black radicals shouting obscenities and racist and homophobic slurs. And then the kids started telling their side of the story. A new picture emerged, one where the confrontation was not nearly as one-sided and hateful as initial reports suggested.

I am not as convinced as Robby Soave and others seem to be that the kids are entirely blameless. A Native-American man walked into their midst, and they responded with war chants and tomahawk chops. The student who smirked at Phillips (I'm intentionally not naming him) omitted that detail in his own version of events I suspect because he realizes it's indefensible.

I will say that they acted about as well as a bunch of hyped-up kids from an all-boys school on a field trip might reasonably be expected to behave after an hour of being provoked. Most of us had the luxury of not having our worst moments plastered all over the Internet. Insensitivity and immaturity in adults is a character flaw, but teenagers are still working things out.

Nathan Phillips was the adult in the situation, and it is impossible to watch the other videos and believe he gave a truthful account of what happened to the media. There were no chants of "Build the wall" or "Trump 2020" as he claimed. The kids did not encircle him and refuse to let him leave; he walked into their midst.

Phillips claims he was just trying to leave, and "that guy in the hat stood in my way, and we were at an impasse. He just blocked my way and wouldn’t allow me to retreat." Video shows the stare-down was initiated by Phillips, and that it happened after he approached another student, who walked away.

"There were in the process of attacking these four black individuals," Phillips told The Detroit Free Press. "These young men were beastly and these old black individuals was their prey, and I stood in between them and so they needed their pounds of flesh and they were looking at me for that." That is at best a misreading of the facts on the ground, and at worst an outright lie.

"The looks in these young men's faces … I mean, if you go back and look at the lynchings that was done (in America) …and you'd see the faces on the people … The glee and the hatred in their faces, that's what these faces looked like," Phillips also said. "They were offended, they were insulted, they were scared, and that's how they responded. One thing that I was taught in my Marine Corp training is that a scared man will kill you. And that's what these boys were. They were scared."

Phillips is talking about, I have to stress again, children. Children who in the full video appear to welcome and clap along with Phillips up until it became clear that he was being confrontational.

Social media engaged in the exact same behavior Phillips describes, looking into the face of children and seeing sexism, white supremacy, hatred, pure evil, what-have-you. "Have you ever seen a more punchable face than this kid’s" asked Reza Aslan, formerly of CNN, about a child.

Honest question. Have you ever seen a more punchable face than this kid’s? pic.twitter.com/jolQ7BZQPD

That child should be punched in the face, agreed CNN's Bakari Sellers.

"Infuriatingly you can’t fight that fucking smirk with a punch or words," wrote Gizmodo's Alex Cranz, about a child.

From elementary school through college I went to school with sheltered upper middle class white boys who could DEVASTATE with a smirk. A facial guesture that weaponized their privilege. Infuriatingly you can’t fight that fucking smirk with a punch or words.

"It's the look of white patriarchy," writes Buzzfeed's Anne Helen Peterson, about a child.

One theme of the conversations over the past 24 hours = how deeply familiar this look is. It's the look of white patriarchy, of course, but that familiarity — that banality — is part of what prompts the visceral reaction. This isn't spectacular. It's life in America. pic.twitter.com/TmziDwAjYA

"As someone who finds the smirk on that teenager's face absolutely horrifying," wrote Princeton professor and former State Department official Anne-Marie Slaughter, in a tweet acknowledging the the social media campaign to shame a child was more complicated than it first appeared.

As someone who finds the smirk on that teenager's face absolutely horrifying, I nevertheless think it's important to read this and accept the possibility that the story is more complicated than may have first appeared. https://t.co/7jx6PN8aV2

I'm willing to bet that fifty years from now, a defining image of this political era will be that smug white MAGA teen disrespecting a Native elder and veteran. It just captures so much.

And let's please not forget that this group of teens who crowded around to mock & harass Nathan Phillips were there for the March for Life: There is an inextricable link between control over women's bodies, white supremacy & young white male entitlement.

And so on. In a single moment, a kid who smiled became a Rorschach test upon whom the worst of social media could project their anxieties. But like the actual Rorschach test, what people saw in his face said infinitely more about them than it did him. Peterson is really angry at "the guy with the gumption … to get a C and come to office hours and try to flirt his way to a better grade," not some kid she's never met.

Twitter is cheaper than therapy I guess. But it also has the side effect of imputing motive upon a minor and tarring him with lifelong infamy, all based on a single snapshot of his life.

It could have been a different snapshot. The eeeeevil smirking student can be seen in a different video turning around and telling his friends to cut it out when they get in an argument with the other Native American activist. I was skeptical of his claim that his smile was intended to defuse the situation. But there is video evidence of him trying to defuse the confrontation.

Approaching the video honestly, I cannot say how I would've looked if someone chanted and banged a drum inches from my face. Perhaps I would have smirked; the situation was absurd! Maybe, just maybe, we shouldn't ruin a kid's life based on a smile. 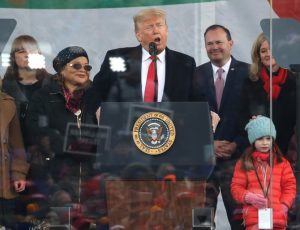