There's a rather silly piece in TechCrunch by a person best known for being a game show participant about his desire to silence those whose words and behavior he does not like via lawfare. In it, he argues that the federal government should open up basically every website with a comments section and every social media platform to endless waves of lawsuits. Ken White over at Popehat does a handy job of explaining just why this would be disastrous, legally:

The court system is broken, perhaps irretrievably so. Justice may not depend entirely on how much money you have, but that is probably the most powerful factor. A lawsuit — even a frivolous one — can be utterly financially ruinous, not to mention terrifying, stressful, and health-threatening. What do I mean by financially ruinous? I mean if you are lucky as you can possibly be and hire a good lawyer who gets the suit dismissed permanently immediately, it will cost many thousands, possibly tens of thousands. If you're stuck in the suit, count on tens or hundreds of thousands.

The suggestion that this system will ease the chaos that would result from the loss of Section 230 is nothing short of lunacy.

It would also be disastrous morally, essentially crippling companies that espouse an ethos of freedom on the Internet. For Chu, this is a feature, not a bug: 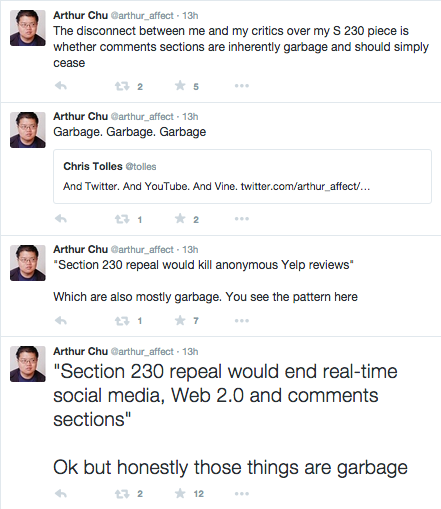 I love that "should simply cease." Really clarifies things.

Now, as it happens, I tend to agree with Chu that comments sections are more or less useless and terrible. There's a reason the Free Beacon has never had them and will never have them: the comment section of any website with more than about 1,000 readers will almost instantaneously devolve into a pit of crude name calling and casual libeling with a healthy sprinkle of anti-Semitism (and other forms of racism) and overt sexism. Anonymity does not breed manners.

The difference between Chu and I—between Chu and anyone who doesn't consider themselves a philosopher king who is well-suited to keep you safe from The Bad Thoughts And Words—is that I don't think these things should effectively be made illegal via financially ruinous lawfare. We must limit freedom of expression* in order to promote tolerance. The children of Herbert Marcuse are a rather scary lot. Those of us who enjoy the Internet should hope they don't get their way.

*I have little sympathy for the argument that using the courts and legal warfare to limit freedom of expression has nothing to do with the First Amendment because the government as embodied by a legislature is not banning you from saying anything. It is a distinction without much of a difference.

Why Private Schools Have Gone Woke