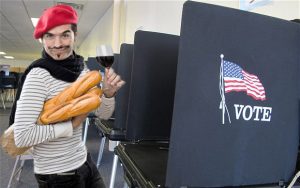 Other countries should be allowed to vote in American presidential elections, a French person has argued.

In a recent column for the Independent, a British media outlet, Clémence Michallon presented her case for why the citizens of foreign countries should have a say when it comes to electing the so-called "leader of the free world."

Michallon, a French citizen living in the United States, is "tired of crossing my fingers hoping that American voters will do the right thing," such as electing Barack Obama to two terms. Because the results of U.S. presidential elections can have such far-reaching consequences for the rest of the world, and for the planet itself via climate change, she reckons it would only be fair to give the international community a voice in those elections.

It's an "absurd" notion that will almost certainly never come to fruition, the French author grants. But that doesn't mean it's not a good idea worth exploring in a column. For example, the fact that the crazed psycho who killed 50 people at mosques in New Zealand was a self-described white nationalist who spoke favorably of Donald Trump means "it’s high time to acknowledge the fact that what happens in the US has immense, tangible consequences on the rest of the world."

Also because of global warming, which impacts "every single being, human or otherwise." The only problem is, if the United States let foreign citizens vote, it might be harder to authorize the full-scale military intervention necessary to roll back carbon emissions outside the United States, which only accounts for about 15 percent of the global share (and falling).

If France were to ever become as powerful as the United States, Michallon writes, she would probably be inclined to let foreign citizens vote in French elections. This raises an interesting question: Why don't we, the American voter, already have a say in other countries' elections? We just elected the most successful president since Abraham Lincoln, so it would only be fair to lend our wisdom and prosperity to foreign elections.

By the way, how are things in France these days? What about Britain? The European Union in general? It would seem that voters in those countries have enough on their plate as it is.