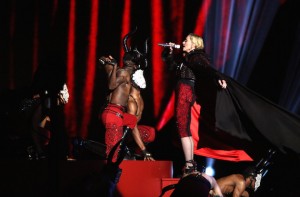 Madonna, 56, took a nasty spill Wednesday while performing at the Brit Awards in London, after her cape snagged on the horn of a dancing satyr. See for yourself:

Ouch. Some observers have pointed out that Hillary Clinton, who is 11 years older than Madonna, also suffered a fall back in 2012 that left her with a brain injury. Clinton needed six months to fully recover, according to her husband. Since then, a serious debate has raged over whether or not Hillary requires the use of an old person's walker to get around. Madonna's misfortune certainly raises questions about Hillary's ability to function as a candidate in the demanding setting of a presidential campaign.

It’s not the first time this has happened. Earlier this year, aging Hollywood star Harrison Ford, 72, broke his leg while filming on the set of Star Wars: Episode VII. Ford’s failure to perform a relatively simple task—pretending to be a fictional character from space—raised concerns about whether Hillary Clinton could pretend to be a likable politician who wants to be president for a good reason (other than conventional powerlust) without seriously injuring herself.

Even more frightening, perhaps, is the thought that Joe Biden—generally considered to be the most qualified candidate running in 2016—is himself older than Hillary.