A prominent player behind an Obama-era electric car investment that lost taxpayers $139 million is a top investor in Proterra, the politically connected electric bus manufacturer repeatedly promoted by the Biden administration.

Venture capital behemoth Kleiner Perkins—led by chairman John Doerr—will hold up to 9.3 percent of Proterra shares once the company goes public in a $1.6 billion merger, according to SEC documents. President Joe Biden has publicized the company on multiple occasions following the merger announcement, going as far as touring a Proterra factory to tout his proposed $45 billion government investment in "clean, zero-emissions buses."

Doerr's involvement in a green energy company favored by Biden is nothing new.

The billionaire investor in 2009 landed a spot on former president Barack Obama's economic advisory board after donating thousands to the Democrat's campaign. Just months later, the administration approved a $529 million government loan to Fisker Automotive, an electric car manufacturer that considered Doerr's firm a "significant investor." Then-vice president Biden announced Fisker's plan to build cars in his home state of Delaware, promising a resurgence of "American manufacturing." The company went on to produce its vehicles in Finland and declared bankruptcy within years of receiving the taxpayer funds.

Biden's overt promotion of Proterra has already drawn parallels to the Obama administration's green energy investment snafus. Sen. Ted Cruz (R., Texas) said Biden's decision to "heavily promote a business where his energy secretary holds a multimillion-dollar stake" could be "even worse than Solyndra." The solar panel company, much like Fisker, went bankrupt after receiving a $535 million loan from the Obama administration. Biden unveiled the loan during a 2009 speech, promising that the "unprecedented investment" would lay the "foundation for long-term growth in the 21st-century economy."

Neither the White House nor Kleiner Perkins returned requests for comment.

Doerr's political influence in the Obama administration went far beyond his role on the economic council. According to a 2013 House Oversight Committee hearing, Doerr positioned himself as an "outside adviser" to Obama on the administration's "green energy spending strategy." He also "talked regularly" with Jonathan Silver, who led the Obama Department of Energy's loan program office. The pair held a meeting in May 2011, shortly before the department quietly froze Fisker's loan due to the company's failure to meet government benchmarks. Around the time of the freeze, Doerr emailed Silver to ask if the administration official could "suggest a time to talk." 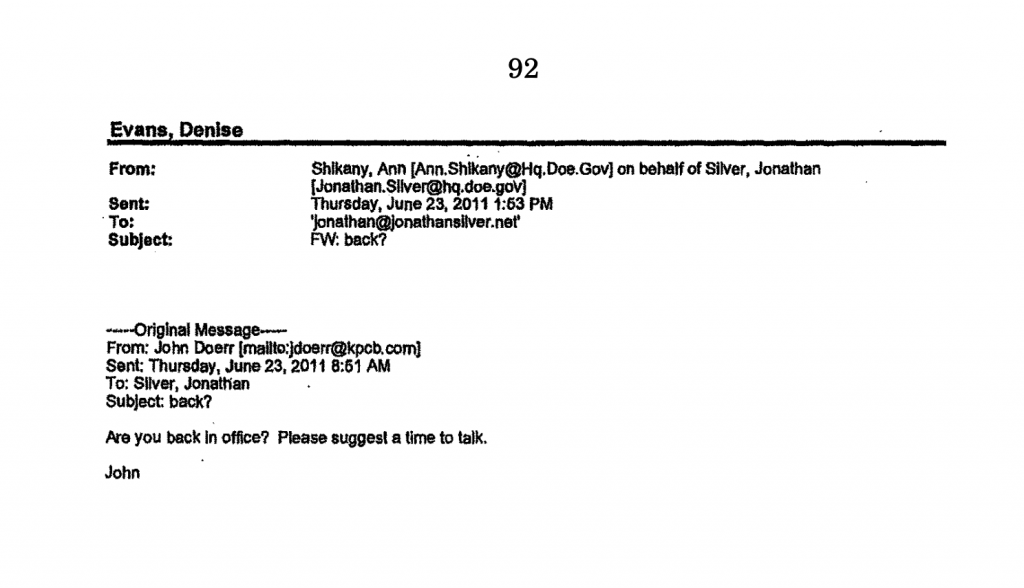 Fisker's subsequent 2013 bankruptcy filing revealed a long list of politically connected creditors—including Hunter Biden. While it is unclear if the president's son invested in Fisker or merely made a deposit on a car he did not receive, Hunter's business partners—Christopher Heinz and Devon Archer—held stakes in Fisker through multiple investment firms.

The list of creditors also included former vice president Al Gore, who has served as a partner at Kleiner Perkins since 2007. Gore has since praised Biden's pledge to cut carbon emissions, and his climate-focused nonprofit—the Climate Reality Project—is urging Congress to "build upon" Biden's "investments in green infrastructure."

Granholm also has a history of diverting taxpayer funds to failed energy companies. As governor of Michigan, she sent $10 million to A123 Systems, an electric battery manufacturer that supplied Fisker and received nearly $250 million from the Obama administration. A123 Systems declared bankruptcy in 2012 and was sold to Wanxiang, a Chinese firm that also purchased Fisker following its bankruptcy proceedings.

In addition to Proterra, the Biden administration in April promoted Evgo, an electric charging station company whose chief commercial officer served on a fundraising group that supported the president's campaign. Biden's proposed infrastructure package includes $15 billion to build 500,000 charging stations across the country.

Proterra is in the "final stages" of going public and will meet with its partner company—ArcLight Clean Transition Corp.—in June to finalize the deal, according to a Friday press release. 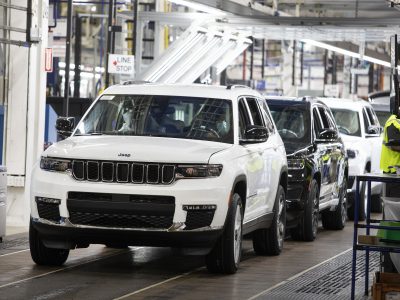 Journalists Must Stop Covering the Biden Presidency Like It’s Normal