The AP declared Republican Roger Marshall the victor in the race to replace retiring GOP senator Pat Roberts. Bollier trailed by a 52-43 margin as of 11 p.m. Tuesday, costing Democrats an opportunity to flip another seat. Bollier endorsed the idea of taking away Kansans' guns in a video that was obtained in October. She pointed to Australia's confiscation as a positive example.

"They have no guns. They don’t allow them. They just took them all away," she said. "And, you know what, it’s pretty darn safe. It’s this amazing thing."

Bollier reacted to the publication of the video by attempting to walk back her comments. She tweeted she doesn't support gun confiscation and never has.

The Marshall campaign slammed Bollier's initial comments as out of touch with Kansas voters and called gun confiscation "an alarming concept." 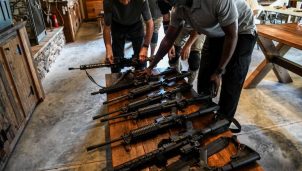